Ryan Gravenberch is the latest name being touted as a possible replacement for Gini Wijnaldum according to reports.

The ever-dependable 30 year-old is keeping his cards very close to his chest regarding where he will be playing next season.

But the longer that there is no news regarding a re-signing with the Reds, the reality increases that he will depart the club with Barcelona the likely destination.

There is little doubt that the club would be prepared for both scenarios and therefore would have a number of alternatives on the table if the popular Dutchman does depart.

Gravenberch is seen as one of the brightest young talents on the Dutch footballing scene.

Coming through the famed Ajax academy, he started his senior career with Jong Ajax, which is the Dutch giants’ reserve team which play in the second division.

His talent from a young age was clearly evident and so much so that he was quickly, promoted to the senior squad and broke the record for the youngest Ajax player to ever play in the Eredivisie at just 16 years and 130 days, breaking the 26 year club record set by Clarence Seedorf.

The 18 year-old starlet has represented his country at every level from the U/16 to the senior squad.

Former Ajax legend Ronald De Boer gave the youngster incredibly high praise recently  saying  “(Mattias) De Ligt might have been an exception at that age, but Gravenberch has unrivalled qualities.” 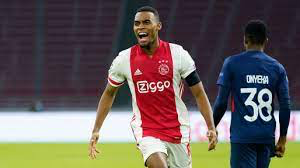 The midfielder made two appearances against the Reds this season in the Champions League group stage where he certainly did not look out of place.

The Express via Italian outlet Gazzetta dello Sport say Liverpool and Chelsea are two of the favourites to sign the midfielder.

The transfer fee is speculated to be around £30million (€35m).

Standing at a imposing 6 ft.3, Gravenberch is seen as versatile, initially as a attacking midfielder, but has developed his game to such a extent where he is now seen as very dependable in the holding role.

He has averaged 1.52 interceptions and 1.16 successful tackles in 25 league games this season while his performances in the Champions League (5 tackles/ 1.83 interceptions) and Europa League (3 tackles/3 interceptions per game) are even more impressive.

On the creative side, Gravenberch has scored three goals in the league and recorded five assists with a successful passing percentage of 86.12%.

Whether Liverpool sign Gravenberch or not, it seems like he will be an emerging star of the game  in the years to come.