In the summer of 2017 we decided on the four founding members of the TLW Hall of Fame and then added four more inductees as the ‘Class of 2017’. Another four went in a year later and every summer four more legends will be inducted. However, we need your help to do it.

The voting panel consists of representatives from TLW, the media, the former players association and also a popular fan vote, which is where YOU come in, by voting below.

There will be a separate category for managers & coaches (with one inductee every four years), but for now we’re just concentrating on the players.

The six remaining candidates who did not get in last year will now be joined by four new nominees this year. Those four are Terry McDermott, Steve Nicol, Ian St John and Phil Thompson. 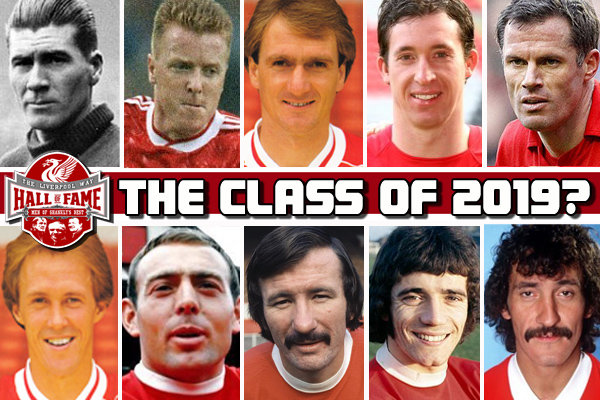 As explained in previous years, it was not just a case of picking the ten greatest players, which in itself would also have been incredibly difficult. Other factors come into it, although only great players will be considered. For example, few would claim that Phil Neal was one of Liverpool’s ten most talented players of all time, but nobody can match his medal haul or achievements.

We also felt that it was important to have a mix of players from across several eras rather than just selecting the greats of the 70s and 80s for example. None of us saw Elisha Scott play but excluding him on that basis wouldn't be right. His career record speaks for itself. Some missed out on the initial ten as a result of the decision to spread it across all eras, but over the coming years they’ll all be added to the mix, usually when someone from their generation has just been voted in (Roger Hunt went in last year so has been replaced by Ian St John in this year's list).

We would really appreciate your support and participation, both in terms of voting and spreading the word by telling your friends and sharing on social media. Hopefully this can pick up momentum and grow each year.

So without further ado, here are this year's nominees...

The man known affectionately as 'the Saint' is one of the most important signings Liverpool ever made. Bill Shankly would later describe the arrival of St John and fellow Scot Ron Yeats as 'the turning point' in the club's history. The Reds were languishing in the second division when St John arrived, but promotion was secured soon after and St John's prolific partnership with Roger Hunt fired the Reds to the league title two years later, and St John was on the scoresheet when the club won the FA Cup for the first time in it's history in 1965.

A boyhood Kopite who lived the dream, 'Thommo' spent 13 years as a player and many more on the coaching staff and is an undoubted Anfield legend. Handed his debut by Bill Shankly as an 18 year old, Thompson went on to make 340 appearances for the club over the next decade and more, forming almost impregnable defensive pairings with Emlyn Hughes and then Alan Hansen. Thompson skippered the Reds to European Cup success in 1981, becoming one of only five Liverpool captains to lift the trophy.

Regarded by many fans as the club's best ever full back, Nicol enjoyed a stellar 13 year career at Anfield where he excelled in a variety of positions. He took over from the ageing Phil Neal at right back during the 1985/86 season and helped the Reds win the league and FA Cup double, but it was on the opposite flank where he enjoyed his best form, combining with John Barnes to wreak havoc during the 1987/88 season when he was named Player of the Year by the football writers.

The scorer of one of the most iconic goals in club history when he headed in at the Anfield Road end in a 7-0 win over Spurs in 1987. Terry Mac was a local lad who had to make his name elsewhere before getting his chance to shine with the Reds. He started at Bury and moved to Newcastle, where he was part of the side that lost to Liverpool in the 1974 FA Cup final. A few months later he was signed by Bob Paisley. He won five league titles, three European Cups and a host of other trophies, as well as being named PFA and Football Writers Player of the Year in 1979/80.

The Ulsterman joined Liverpool in 1912 and left in 1934, meaning he was between the sticks for an incredible 22 years. In that time he won two league titles but, more importantly, he captured the hearts of those on the Kop. Scott was idolised by the fans, so much so that when the club attempted to sell him (to Everton!) it was the reaction of the supporters that forced them into changing their mind. Legendary Everton striker Dixie Dean described him as the best keeper in the world, and a fan poll in 1939 saw him voted Liverpool's greatest ever player.

The Anfield Iron. The man who according to Shanks "was not born, he was quarried". Smith was the hardest man in an era of hard men but he was also a terrific footballer who excelled in a number of positions. He made his debut in 1963 and his final appearance came 15 years later. In that time he won everything there was to win, with his finest hour coming in Rome in 1977 when he found the net with a thumping header in the European Cup Final. Tommy played 638 times for the club and paid a heavy price for that in later life with numerous ailments including severe arthritis and dementia. He passed away in April of this year, aged 74.