Why Julian Nagelsmann could be the perfect successor to Jurgen Klopp

The thought of Jürgen Klopp no longer being manager of Liverpool is something no Reds fan wants to contemplate at this point of time.The German has turned around a club who was well and truly at the crossroads on his arrival into a European and domestic power once again.It is not just his ability to turn his squad into better players, but better people as well, a rare blend indeed.But as we know, (and it has never been so stark than in this uncertain time) that nothing lasts forever.There has been much discussion over the past year regarding how long the tenure of Klopp will be.He silenced any doubts that it will be in the foreseeable future by signing a extension until the summer of 2024.But after that remains a question mark with former Reds midfielder turned pundit Steve McManaman pondering this week whether he may be tempted by German juggernaut Bayern Munich.While it will be a terribly sad moment when Jürgen does depart, there is no doubt he will leave the club in fine shape for his successor.There will be no shortage of applicants, but there is an individual emerging who has the similar principles in how the game should be played.That man is Red Bull Leipzig manager Julian Nagelsmann.The 32 year-old is seen is Germany’s brightest young manager star and after doing a fine job at Hoffenheim at both under-age and senior level, currently has Red Bull in third position in the league and in the quarter-finals of the Champions League after comprehensively dispatching Tottenham in the previous round.German journalist Guido Schafer  and used to play alongside Klopp at Mainz and currently covers Leipzig. 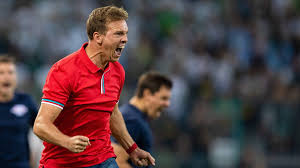 He is therefore the ideal person to cast an analytical eye on Nagelsmann and told the Echo why he is such an interesting prospect to keep an eye on. “Nagelsmann is someone who wants [his team to have] the ball. It’s pressing but not all over the pitch and for Liverpool also it’s only in some areas."The idea is quite similar [to what Klopp demands] and the players have to be very intelligent to show the coach they are intelligent enough."It’s not easy to work under these coaches - they want all of you every day. But then you get a better player."Journalists like to strike a good working relationship with managers and Schafer said that Nagelsmann is someone who is engaging and some have likened him to a young Jose Mourinho in that he came to management without much of a senior playing career behind him.But there is a major difference in their conduct as Schafer explained.“There is a big difference in the relationship with the press and the journalists."Mourinho is very arrogant and sometimes the devil. “Julian is the opposite and I like to work with him - if you ask a question, he answers it."While there is not a sense of overwhelming arrogance that the Portuguese commonly displays, there is a quiet confidence about Nagelsmann that is redeeming.“Nagelsmann is a genius as a coach - but every genius loves himself! Julian loves Julian."He is talented, he is skilful and he is powerful. Sometimes perhaps he forces too much from his team - he knows 20 or 25 tactical formations. Sometimes it is one too much but he is a very good coach."He also has good humour like Jurgen and he is 32! Schafer believes the sky is the limit for the young manager and it is why Liverpool should be keeping a very close eye on him.“It’s crazy. His English is perfect and for Leipzig, the best coach in Germany is sitting on their bench."He is an option for every team all over the world."