Steven Gerrard is putting at risk any hopes of becoming Liverpool manager if he leaves Rangers and joins Aston Villa according to Ally McCoist.

Dean Smith was sacked on Sunday after three years at Villa where he returned the Midlands club to the Premier League and had a win percentage just over 39% during his tenure.

Gerrard went into Rangers folklore last season by breaking the stranglehold that bitter rivals Celtic had on the Scottish Premiership guiding them to a unbeaten season and winning many managerial awards along the way.

That led to Gerrard being linked to some Premier League jobs, firstly Newcastle and in recent days the Villa post.

The momentum of Gerrard getting the job at Villa Park seems to gathering pace by the hour, however McCoist feels that he will be much better served by staying at Ibrox for the time being.

Metro (via Talksport) reported the Rangers legend as saying:

“Are you trying to tell me Aston Villa are a bigger club than Glasgow Rangers? Of course he should (stay at Rangers).

‘So he goes to Aston Villa and it doesn’t work out he’s not going to get the Liverpool job. He could stay at Rangers, retain the league, straight into the Champions League, that’s great success and a better chance of the Liverpool job.” 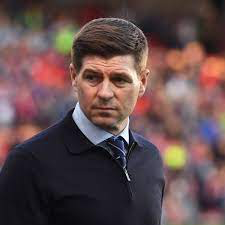 Gerrard has regularly said that managing Liverpool is his dream job however he has an awful lot to prove to even be considered for the job once Jurgen Klopp departs.

He is even comfortable in the knowledge that it may never come his way.

“Liverpool is my club. I had a great journey. Is it a dream for me to one day be the Liverpool manager? Yes, it is, but not yet and who's to say I'll ever be good enough. There's a lot of managers on this planet, we need to respect Jurgen first and foremost."

Gerrard will be looking to follow the footsteps of his former manager in Brendan Rodgers who after coming down from a very successful reign at Celtic, has turned Leicester into a consistent top six club while also challenging for domestic trophies.

Villa have often been referred to as the ‘sleeping giant’ of the Premier League, a club who have looked really promising at certain periods of a season, only to fail when the pressure is at its highest.

So could the man who haunted the Claret and Blue so many times in his playing days (13 goals in 27 games across all competitions) be their ultimate saviour?