Bunch of 5s: "Reds I'd want with me in a zombie apocalypse"

It's a question I'm sure we've all spent hours deliberating over; which five Liverpool players (past or present and in their prime) would you want with you if there was a '28 Days Later' style zombie apocalypse?

Choosing the correct team could be the difference between life and death, so obviously you don't want to make any rash decisions or allow personal sentiment to get in the way.

I mean we all love King Kenny, but the ability to play a defence splitting pass, curl a ball into the the top corner from 25 yards after turning a defender or deliver a perfectly timed pithy one liner is not really going to be that useful when you're being chased by a horde of flesh eating zombies is it? Robbie Fowler is another who is universally loved by LFC fans everywhere, but number 9's are notoriously selfish, and that's not really what you want when the stakes are this high.

So without further ado, here's the five Reds I want in my corner as we try to survive the zombie takeover...

To survive in these situations you need to be streetwise. You need cunning, you need to be sneaky, you need to do whatever you can to gain even the slightest little advantage that could be the difference between surviving or being eaten. No-one does any of that better than Suarez. 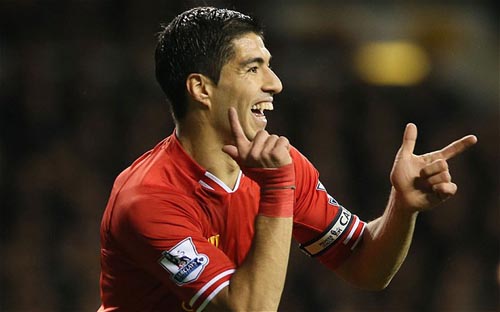 When you have a flesh eating zombie coming at you with its jaws primed and ready for action, who better to throw at them than a man who can actually beat them at their own game. "Pah? Call that a set of teeth?  I'll show you teeth! Go get em Luis!!"  If it comes to a battle of chompers and flesh eaters, I want Suarez in my corner.

The only concern I'd have is that he might sneak off in the middle of the night if we came across another group who had more supplies, a more secure hideout and a better chance of survival. Worth his weight in gold, we'd all love him but the risk for betrayal would always be there.

It was a toss up between him and Graeme Souness. I couldn't have taken both of them, there's too much bad blood there and they'd probably end up killing eachother and I'd be down to three men in no time. 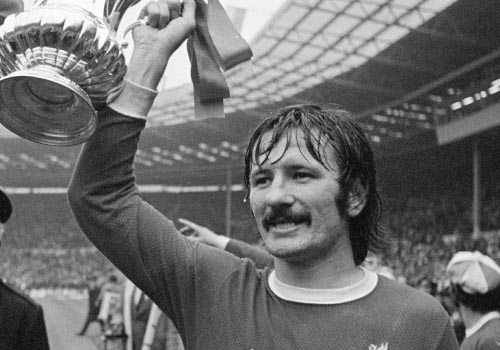 I'm taking the Anfield Iron as whilst there's little to choose between him and Souey in terms of toughness, Smithy is a lot less vain and I wouldn't have to worry about him putting us at risk by demanding we go on reconnaissance missions to Boots or Superdrug to search for teeth whitener and false tan.

Every group needs it's muscle and every group leader (in this case me!) needs a strong, dependable, hard as nails right hand man to slap down any dissenting voices *glares at Suarez* and to not ask too many questions. Tommy Smith fills that role.  You wanna get to me? You'll have to go through Tommy first. All the best.

The Big Dutchman is exactly the kind of guy you need in these situations. Every group has to have it's eccentric, unpredictable, off the wall character and that's Erik Meijer to a tee. Erik is clearly a guy who wouldn't hesitate to put himself in harm's way to save a comrade. 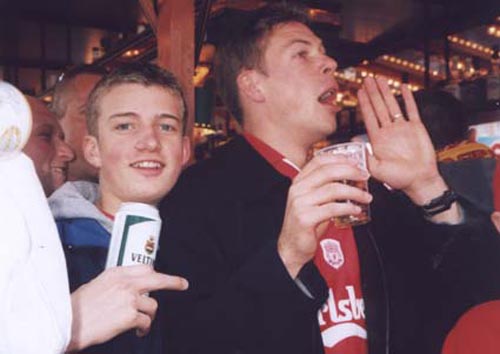 Erik is completely fearless and can obviously handle himself in a scrap, but he brings far more to the table than that.  He can cook too (who can ever forget the weekly recipes he'd post onto his 'Sporting Icons Blog' back in the day?) and he'd also provide those moments of levity to keep everyone going because he's... well for want of a better expression, as mad as a box of frogs.

I expect he'd share his food with rats and would eventually tame one of them. This rat would become his best friend and would keep Erik company wherever he went.  He'd name it 'Westerveld' after his old Anfield pal and he'd talk to 'Westerveld' constantly, much to the annoyance of Tommy Smith who would regularly threaten to eat 'that bloody vermin'.

Erik: "Sorry Anfield Iron, I cannot do that.  Where the Big Dutchman goes, Westerveld goes too!" he'd say, before carefully placing his rodent pal under his cowboy hat, picking up his shotgun and moving on out, softly singing Celine Dion songs to his little furry companion and telling him not to be afraid.

In a situation such as this you need brains, and there are few smarter than Johnny Barnes.  It's also important to keep ones spirits up, and what better way to do that than to listen to Barnesy rap?  I honestly can't think of a single scenario in which having John Barnes around would be anything other than a massive help.

I can picture it now, we're holed up in an old building, zombies all clamouring to get in the front.  Things are looking bleak, it's only a matter of time before they force their way in.  Panic is beginning to take hold of the group.  How do we get out of this?  We're all going to die aren't we?  What can we do to defeat these zombies and escape this hellhole?  Is there no way out of here?  Has nobody got a plan?  Digger, you're the smart one, what do we do?

Suddenly, a lone, wondrous, soulful voice pipes up, in pitch perfect tune "there's only one way to beat them..... get round the back" The tension is lifted, we all laugh and complete the next few lines of the rap before escaping out of the back of the building.  Good old Digger coming up trumps again. What a guy!

A surprise choice you're probably thinking. Well I've thought this through and it's a no brainer really. In every movie that's ever been made on this subject there's always some loser who falls over and turns an ankle whilst running away from the flesh eating horde. It's usually a woman, and often someone ends up dying whilst trying to rescue the complete liability instead of just leaving them to the fate they deserve. 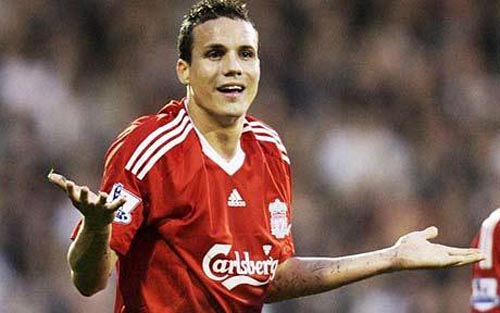 In the absence of a female to fill this role, I'm going with the next best thing; walking sicknote Degen. Let him be the one who trips over the branch in the woods because he was looking backwards at the pursuing zombie hordes instead of watching where he was going. Degen would no doubt say "It's ok, leave me here and save yourselves" but he wouldn't really mean it, he'd be expecting someone to come back for him, risking their own life to carry his worthless behind to safety.

Tommy Smith and Big Erik might try to go back and rescue him, but I'm sure I'd be able to dissuade them from such craziness by saying "that fool was on 40k a week when he played for Liverpool. How much did you boys get again?"  Tommy might actually do the zombies job for them.

It may seem harsh, but it's a cruel, dog eat dog world out there now and someone in the group has to be 'expendable' Degen fits the bill perfectly. Whilst the zombies are gorging on him the rest of us can make our escape. It might be the one and only time Philipp Degen has been of any use to anybody.

Of course, when Degen falls the group would be a little short handed, but if Hollywood blockbusters are any true indicator of how these situations will play out then we'd soon pick up a new member somewhere along the way.  Someone who was out there surviving on his own, using his wits and survival instincts to avoid the flesh eating menace.  That person would be David Thompson, I imagine we'd run into him whilst on a food run to an abandoned supermarket or something.

We'd find him sat in the corner, urchin like; dirty faced, hair matted, casually browsing through a porno mag whilst eating cold beans out of a tin.  Upon seeing our group, instead of trying to escape, the fiery Thommo would immediately charge at both Mad Erik and the Anfield Iron. They'd eventually subdue him but not before he'd landed a flurry of blows and bloodied the nose of the Big Dutchman, who would briefly look startled at the sight of his own blood before throwing back his head, bellowing out a hearty laugh and saying "this little one has a big heart, can we keep him?"

Little Thommo would be a great scavenger, darting in and out of small holes and crevices, foraging all kinds of useful weapons as well as food. He's probably an expert climber too, and he'd be of great use when it comes to scouting out buildings and staying one step ahead of the blood thirsty undead.

So there you have it, that's the five Reds I'm choosing to help me survive in a world that's been taken over by slobbering, braindead, fetid, lumbering, rancid mutants. Actually that sounds like a visit to Old Trafford. Maybe I should bring well renowned Manc-buster Danny Murphy along too?