This summer sees the launch of "The Liverpool Way Hall of Fame". More details on the selection process and the nominees will be revealed in due course, but to kick things off we will be naming the four founder members of the Hall of Fame, or TLW’s ‘Mount Rushmore’ if you like.

Very often in sport a debate is had about who is the greatest, or who is on the 'Mount Rushmore' of their field? The four greatest players/contributors to their sport. It's one of the great sport conversations. It's a debate often had in US sport because the field is smaller and narrower than in football. But we here at TLW want to have our own Mount Rushmore, built from the greatest men to represent and serve Liverpool Football Club.

Three are obviously shoe-ins. Who could imagine Liverpool without Bill Shankly? The man who made Liverpool what it is. Or Sir Bob, the man who hauled in three European Cups. Then there’s the King, a man who represented the best that Liverpool could be on and off the field. 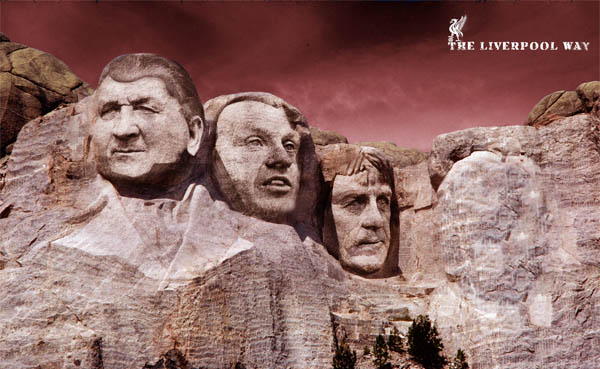 But who is the fourth most respected, iconic, legendary figure in club history? After much discussion, we’ve narrowed it down to a choice of four candidates. The factors that determined this were length of service, achievements and status. Others were close and had a legitimate case for inclusion, but this is the final quartet for you to choose between.

The Steven Gerrard of his day, Billy was a genuine superstar who spent his entire professional career with Liverpool after joining as a 16 year old in 1938. World War II delayed his debut until 1946 but he soon made up for lost time, amassing 534 appearances and scoring 228 goals before his retirement in 1960. The Scot was held in such high esteem that the Reds were often referred to as "Liddellpool" for a time when he was in his pomp.

Known as "Mr Liverpool", Ronnie dedicated most of his life to LFC. He initially joined as a player at 15 years of age and left 49 years later having served the club with great distinction in various roles. A member of the legendary 'boot room', Ronnie was a regular visitor to Melwood even after his retirement, right up until his death earlier this year. Liverpool has never had a more dedicated servant, and probably never will.

"Smokin' Joe" joined the Liverpool coaching staff in 1958 and became a trusted lieutenant of both Shankly and Paisley before eventually stepping into the hot seat himself in 1983, winning an historic treble of League, League Cup and European Cup in his first season as manager. He may have added another European Cup a year later but for the Heysel tragedy. He resigned following the game and was replaced by Dalglish, but Fagan is unquestionably one of the Anfield greats.

"Stevie G" joined the Reds at eight years of age and left 27 years later, viewed in the eyes of some as the club's greatest ever player. He returned in 2017 after a two year stint in America with LA Galaxy to embark on what will hopefully be a long coaching career with the club he served with such distinction as a player. His achievements on the field speak for themselves, you all know what he did as you witnessed it.

All of the aforementioned would be worthy of a place alongside ‘the Big three’ and rest assured, those who miss out on this will all end up in the Hall of Fame sooner rather than later, but only one can fill the final spot on Mount Rushmore so we’ll now put that to a vote to decide on the fourth member.

Who votes on it? Good question. The way we plan to do it is to have a committee which will consist of representatives from TLW, the media, the former players association as well as a fan vote, which is where you come in, by voting below or on social media etc….

The fan vote will count as one selection in the final process. The other votes will be cast by:

We do have a couple of other irons in the fire too but as they’re not yet confirmed we’ll hold off on naming them for now. Watch this space.

When Mount Rushmore is decided the Hall of Fame process then begins to select the next four members. The voting process is the same as above and we’ll release more details - including the nominees - as soon as the fourth inductee has been determined.

In the meantime, cast your votes: