When you think of guile and grace as a midfielder, one name that personally comes to mind is Xabi Alonso. To this day, Xabi remains in my top three all-time favourite Liverpool players for many of the qualities that will be discussed in this piece.Signed for a absolute snip at £10.7 million from Real Sociedad at the start of Rafa Benitez's tenure in the summer of 2004, the Spaniard's arrival in England was at the peak of a pre-eminent era for central midfielders in the Premier League. He joined the likes of Paul Scholes, Frank Lampard, Roy Keane, Patrick Vieira, Claude Makalele while having a pretty handy teammate in Steven Gerrard. Alonso displayed a point of difference to some of his contemporaries. While the English game was largely built on power, pace and work ethic, Alonso's brought a high level of technical skill to the forefront. The Liverpool midfield of the mid 2000s had a terrific blend.  Didi Hamman and Mo Sissoko were the glue, Gerrard the talismanic figure, Luis Garcia the crafty X factor, while Alonso was the player who made the team tick. When he played well, more often than not Liverpool were on the winning side.Creating goals was the main strength of Alonso's game, however when he put the ball in the back in the net himself, he did it in style with some substance attached for good measure. Some examples included a superb free kick which helped turn round a two goal deficit against Fulham, finishing off a terrific flowing team move with aplomb against the Gunners (both were in his first few months at the club), along with scoring the vital equaliser in the Champions League final against AC Milan later that season. 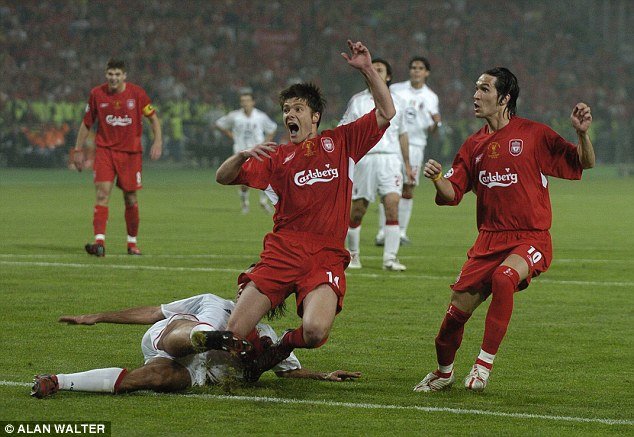 However it is a goal in the early part of the 2006/7 season which underlined Alonso's brilliant game sense, vision and technical quality in the one passage of play. The Reds had made a pretty miserable start to the new campaign, claiming four points from as many games which included losses to Chelsea and a galling 3-0 defeat to Everton at Goodison Park.Having scored just two goals in those four games, the Reds were desperate to kick start their season. Newcastle were the opponents for the midweek game and summer signing Dirk Kurt opened his account for his new club in the first half which was Liverpool's first goal in over 300 minutes. Alonso was at the heart of the move, playing a defence splitting ball to Steve Finnan who crossed it to the Dutchman who scored with a sliding finish.With the pressure of scoring finally off their shoulders, the confidence began to grow with the home side looking to double their lead. Their opponents were offering little threat going forward and it became a matter of when Liverpool would double their lead. Step forward the Spanish maestro.With Newcastle looking to produce a rare attack, Alonso took the ball from the feet of Charles N'Zogbia and while assessing what options were able on the counter attack, saw Magpies goalkeeper Steve Harper off his line.Alonso had a history of scoring from his own half, having done so in the third round of the FA Cup in the previous season against Luton. While that strike had a slight sense of good fortune as it took a few bobbles before going into the empty net, on this occasion he struck the ball with venom from 70 yards, taking one bounce before lodging in the back of the net giving a backpedalling Harper no chance.

Anfield broke into a rapturous cheers as Alonso leaped into the arms of Pepe Reina with the goal helping secure a second home win of the season. Many players have tried to follow Alonso's lead and it can look quite ugly if not executed correctly. The ability of the Spaniard to assess the situation and get his technique right was simply sublime. 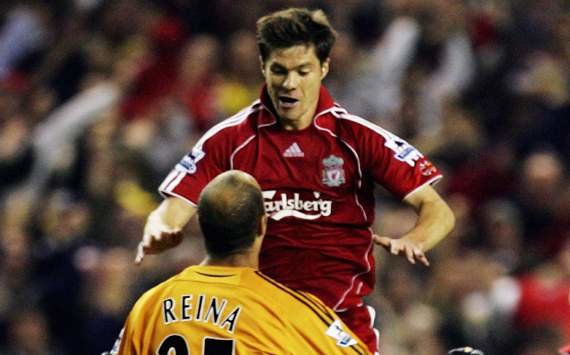 In all, Alonso made 143 appearances for the Reds over five seasons contributing 15 goals. He played for the club in a time where the record in Europe was top class, but unfortunately could not find the consistency needed across a domestic campaign.Xabi's departure from the club was much like Fernando Torres and Luis Suarez in that it left a sour taste and still does to this day. There was a lot of speculation that Alonso was offput by Benitez's pursuit of Aston Villa's Gareth Barry in the summer of 2008 which ended up being a fruitless chase.There was also a wide held belief that the friction between the pair began a few months prior when Alonso missed the second leg of a Champions League quarter final clash against Inter Milan to be at the birth of his son. According to Alonso, he offered to fly out to Milan after the birth but it was refused by the manager. Alonso ended up staying for the 08/09 season, but soon after he departed to join Real Madrid.Whatever the reason, his unfortunate departure was widely felt from the fans to the players itself. Gerrard openly admitted he was devastated when Alonso left, a player who he described as the best midfielder he played with.What is a known fact is that Alonso left a indelible mark on the club, and as fans can be extremely thankful for his contribution.