Liverpool are looking closely at a player who is seen as one of Spanish Football’s most exciting prospects.20 year-old Ferran Torres has come through the youth ranks at Valencia and made his senior debut for Los Ches at 17 years of age.In that time, he has already made 90 first team appearances. The youngster has had a breakthrough campaign scoring six goals in all competitions including two goals and two assists in the Champions League.And in doing so, he became the first player born in 2000 to net a Champions League goal for a Spanish club.Torres is viewed as a versatile attack minded player who can play on either flank, as a winger and has a tremendous vertical leap which can see him play as a centre forward.But while these are all attributes that will interest the Reds, the Mirror reports they will face stiff competition from Real Madrid and Barcelona while Man City and Juventus are also sniffing around.The young talent has represented his country at the various youth levels and is reportedly close to earning a cap at the highest level. 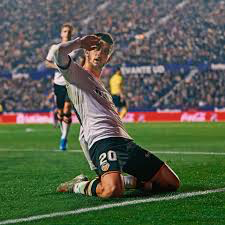 Former Valencia manager Marcelino was someone who had no doubts over the ability of Torres. “All of us within the club were sure that we were looking at a very high-level footballer.“It was only a matter of time before he exploded, because it was clear this player had to play. “He still has a significant margin for improvement, but for me, he is one of the revelations of the season."While Valencia are hoping they can persuade the youngster to extend his stay, the likelihood is that he will be on the move.There is debate about any transfer fee that will be set.Valencia are protected by a release clause, which has been reported in the Spanish media as being as high as €90m.That is unlikely to be true though, with the player signing his current deal on his 18th birthday - which would mean a much lower release clause than suggested.If this youngster than have even half the career of another F. Torres, then he will have done very well indeed.