1996/97 was to turn out to be a very disappointing campaign for the Reds, but it will be remembered as the season when Michael Owen announced himself on the first team stage. 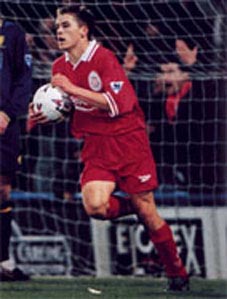 Things had been looking good for Liverpool for most of the season before a David James inspired late collapse saw them throw away a lead in the Premiership and also go crashing out of Europe after a hammering in Paris.  Michael Owen had been scoring for fun in the reserve and youth teams and had fired Liverpool to FA Youth Cup success the season before, scoring eleven goals in just five games.
With the title out of reach, Liverpool travelled to Selhurst Park with only a Champions League place to fight for. With his team two goals down to the Dons, Roy Evans introduced Owen for his senior debut and within 16 minutes the young prodigy responded with a well taken goal. Collecting Stig Bjornebye's fine through ball, the 17 year old raced through the inside left channel before setting himself and coolly sidefooting the ball into the far corner with his right foot.
It was the fulfillment of a childhood dream, yet such was the maturity of Owen even at that tender age, that he didn't celebrate; he picked the ball out of the net and raced back to the centre circle to restart the game. The Reds couldn't force an equaliser, however, and the season ended in disappointment a few days later when Sheffield Wednesday held Liverpool to a draw, despite losing their goalkeeper through injury and then having his replacement sent off.
Liverpool finished fourth after leading the table for much of the year, but Michael Owen had arrived.