Ralph Hasenhuttl has signalled an intention to bring back Takumi Minamino to Southampton but is unsure on what Liverpool have in mind for the player.

The Japanese international was sent on loan to the South Coast club in the January transfer window with Jurgen Klopp wanting to assess his progress as a player from afar with opportunities few and far between with the Reds.

The 26 year-old made a dream start in his first appearance scoring a goal against Newcastle and then made it two in three games against Chelsea.

But rather than being a pathway to further opportunity and much needed confidence, Minamino was an unused substitute for a stretch between mid March and late April with no clear explanation given.

He returned to the starting lineup for the Saints final four games and in all made 10 appearances with nine starts.

Speaking about the attacking midfielder to Hampshire Live, Hasenhuttl explained the difficult position that a player like Minamino found himself in

“It is never nice for a player when you don't end up getting the game time that you want to have, when you only train and are not see as part of the first 11.

“This definitely then helps your mentality when you later get a lift and a chance to play. Players like to join big clubs because they get a lot of money there and they get a lot of praise for being a part of the top six, if you will.

“But it is only for a short moment that you are happy about it because when you are not playing enough times and you are not important for the club, then it feels very awful, very quickly.

“The most important thing for him is that he gets a chance to play. We had so much rotation with injuries and everything that it was clear he would get a lot of game time with us.

With the transfer window now open, there are many decisions that all clubs have to make in who they keep, move on and send away for more experience.

Klopp has been highly complementary of Minamino’s progress but as someone in their mid 20’s, the time for a definite decision on Minamino is likely to be imminent.

Hasenhuttl says that they will remain in dialogue with Liverpool throughout the summer.

“We have had talks with them and they are not so sure what will happen with him because Liverpool may make some things happen in the transfer market.

“For him, it was important to play here. We gave him that chance to play and we have enjoyed having him here." 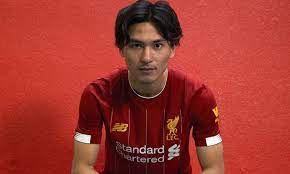