Lijnders: The ambition of these players is from another planet - Latest News - The Liverpool Way Jump to content

Lijnders: The ambition of these players is from another planet

Liverpool assistant coach Pep Lijnders has detailed just what makes this Liverpool side stand out from the pack.The right-hand man for Jürgen Klopp has been at the Reds for two separate spells working with the German and his predecessor in Brendan Rodgers.In that time he has seen plenty of evolution and he documented that in detail as The Mirror(via The Athletic) reported:“The passion and ambition of these players is from another planet."Their self-confidence, their self-criticism, that is what makes us consistent. “These boys have the ability to make even a simple rondo competitive.“People talk about going game to game — no, we commit session to session. Small things make big things happen. “You have to focus on doing the small things right constantly.The highly rated 36 year-old Dutchman who spent time in charge of his own team in NEC, also spoke about about his relationship with Klopp and says it is as close as you can get with a manager and his number two. 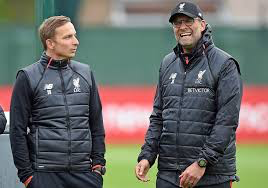 “There’s a super dynamic between us."It’s much more than just assistant and manager. “What I mean by that is that I believe you need 100 per cent trust in this job because we have to make so many decisions on a daily basis.“I love working for him. He sees who I am, and respects that. We know what to expect from each other.Lijnders says Jürgen is not only a manager of a Football team, but someone who truly cares for his players in an individual sense.“Jurgen is a true leader. “He’s inspirational and motivational. “He still surprises me every day with something he says. His brain works differently to a lot of other brains."And I think everyone who works with Jurgen has the feeling he really cares about you and your development. “There is no ego, he purely searches for the right thing to do.”