All votes are in and the Liverpool Way Hall of Fame, Class of 2018 has been decided. It was very close, particularly for the final spot. Whereas last year four names clearly emerged from the pack, this time it was much closer.

Roger Hunt and Emlyn Hughes led the way, meaning 'Sir Roger' goes in at the second attempt after missing out last year, while 'Crazy Horse' is in at the first time of asking.

Joining them are two iconic Scots, Alan Hansen and Graeme Souness, who will take their place alongside the third member of their legendary crew, 'King Kenny' who went in as a founder member a year ago.

The breakdown of the voting was as follows:

As you can see below, 1029 votes were cast via a poll on the website and Hansen was a clear number one with Souness out on his own in second. Hughes was a relatively comfortable third spot but Hunt just about held off Carragher for fourth. 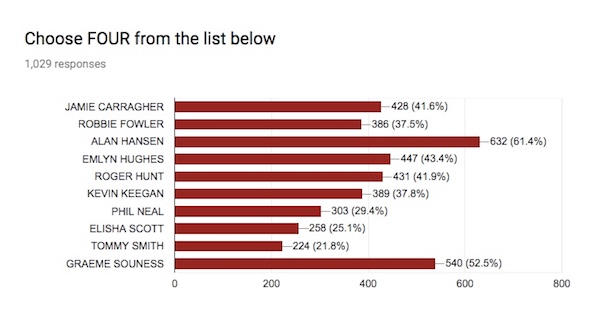 Note: Hunt, Hughes and Neal were tied on 3 votes so the tie breaker was the community vote above. Neal received the least votes in the website poll so he missed out.

Graeme Souness - Souness' reputation suffered because of what happened during his managerial reign at Anfield, but he defined the late 70s and early 80s dominance of Anfield as much as ‘King Kenny’.

Phil Neal - The most successful LFC player ever. That has to be enough to get him in.

Emlyn Hughes - The first LFC captain to lift the European Cup. He got a bit of stick in the 80s and 90s but maybe some people forgot just how good he was.

Kevin Keegan - LFC's first 'superstar' player. He was man of the match in the first European Cup final success in 1977, which ended an incredible journey that he and other young players had originally started with Shankly in the late 60s.

Jamie Carragher - A leader. You could hear his voice from anywhere, whether on the pitch or in the stands. A natural winner who gave everything he had for the red shirt and wouldn’t accept anyone who didn’t do likewise. They say the best players are the quickest thinkers and Carra read the game so well because he was such a quick thinker on the pitch. He’s quick off it too, not many get the better of him!

Robbie Fowler - I would always watch and admire how clinical Robbie was in training. “Good finish” “Great goal” “Quality” “Class”. It was constant because he would hit the net with unerring accuracy and regularity. It looked effortless but it’s a talent you can’t teach. I only had the chance to play up top with him once, in the glamorous surroundings of a pre-season friendly at Lincoln! I have no idea of the result or if either of us scored, but I do know that I get to say I played up front with a man who was one of our best ever strikers!

Roger Hunt - Only ‘Rushy’ has scored more goals for Liverpool. That says it all. I love a goalscorer and the figures ‘Sir Roger’ hit every year shows just how good he was at sticking it in the net.

Emlyn Hughes - Seeing the captain lift a trophy is always an image that endures and Emlyn lifting the first European Cup for Liverpool will never be forgotten. Sadly he is no longer with us but his name lives on and we’ll never forget his contribution at Liverpool. I played in the game when a minute’s silence was held for him and it was a very emotional occasion after all that he did for the club. Thankfully we won, which is something Emlyn was familiar with doing in the Red shirt.

Jamie Carragher - Second on the all time appearances list with 737. Only Ian Callaghan has pulled the shirt on more times. That in itself is justification for this selection but there are plenty of other reasons too.

Roger Hunt - Obviously I never saw him play but he was my Dad’s hero and his goalscoring record speaks for itself. He played an integral role in putting us back on the football map and in addition to all that he achieved at Anfield he also won the World Cup.

Phil Neal - His unrivalled list of honours made this an easy decision. He won everything and he never missed any games, playing through all sorts of injuries including broken bones. Also chipped in with vital goals.

Alan Hansen - I agonised over this one and so nearly went with Souness, but ‘Jocky’ got the nod based on longevity as much as anything else. Both were world class players, both were as good as anyone in their respective positions and both achieved great things with the club. Souness left and Hansen didn’t, and that swayed it in Hansen’s favour.

So there you have it, that's it for another year. See you next year when we'll have four new names (yet to be determined) joining the remaining six from this year to see who goes in as the Class of 2019.