Roger Hunt's testimonial was extra special when you consider that he still managed to draw a capacity crowd despite having been away from Anfield for over two years. 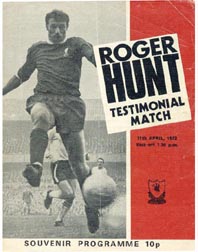 Roger left for Bolton in 1969-70 after eleven seasons with Liverpool, but club rules at the time stipulated that players couldn't have a testimonial until they retired from playing. This meant that Roger would have to wait until the end of 1971-2 to be honoured and as such he did not expect a huge turnout.
But Kopites never forget a hero and despite a night of torrential rain the gates were locked half an hour before kickoff with an estimated 10,000 still outside. The official attendance of 55,214 was higher than all but one of the league games at Anfield that season and the largest ever recorded for a testimonial in England.
They saw Roger hit a hat trick as Liverpool's 1965 FA Cup winning team beat an International XI, comprising many of his team mates from England’s 1966 World Cup winning side, 8-6.
Check out Howard Kendall in the middle of the back row wearing a Liverpool away shirt. Hopefully there's no blues reading this, as they may send the lynch mob after their greatest ever manager!