Liverpool are a number of clubs monitoring promising French defender Evan Ndicka.The 20 year-old currently plays at Eintracht Frankfurt after coming through the ranks at Auxerre.Ndicka who has represented his country at the various youth levels is on the radar of Valencia and Sevilla and Sky Sports reports that Liverpool and Arsenal are also looking closely at the youngster.Ndicka mainly plays as a Central defender but is more than comfortable playing at left-back and it is that flexibility which could interest the Reds as they search for a capable backup to Andy Robertson.The defender has made 14 starts and one substitute appearance in the Bundesliga this season. 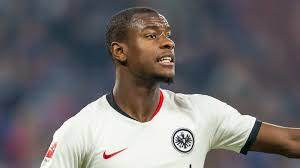 On a wider note, there is a level of uncertainty of when the transfer window will be opened due to the fact that domestic leagues may be still completing the current season.The window is due to re-open on the 18th of June. Sky Sports also report that FIFA are reviewing the situation with regards to player registrations, with the possibility that players such as Adam Lallana could run out of contract at their club before the season restarts. One possibility been mooted is players in the position of Lallana and reserve goalkeeper Andy Lonergan be given rolling contracts on a week by week basis.It is just one more issue that Football has to confront in a time of unprecedented uncertainty.