"Up, Up and Away" by Steve Horton

Fifty one years ago Liverpool gained promotion to the 1st Division after a frustrating eight year spell in the second tier that saw the team go close but not close enough on several occasions. That period was marred by a string of signings who were adequate at best, a club record defeat, a humiliating FA Cup exit and a Board who seemed content to just plod along.

After surviving relegation by the skin of their teeth in May 1953, a last day win over Chelsea keeping them up, the Reds hit the bottom the week before Christmas and were never off it. A 1-0 home defeat by Cardiff on Easter Saturday 1954 confirmed the drop with two games still to play and away form played a massive part in it, the first thirteen games being lost.

The Board showed no ambition to come back up and provided no money for signings, the three arrivals during the close season all being free transfers. During the autumn of 1954 relegation to the 3rd Division looked a real possibility and a nadir was reached on 11th December when the Reds were thrashed 9-1 at Birmingham, which remains the club record defeat. The ship was steadied and they finished 11th, the only bright spot of the season being a sensational 4-0 win over Everton at Goodison Park in the 4th Round of the FA Cup.

For the next four seasons the Reds finished third, third, fourth and fourth, although on three of these occasions they were well off the promotion places in terms of points. The closest they came to going up was in 1957-58 when with just two games remaining they were a point off the automatic promotion places, only to draw those two games. 1958-59 was a watershed season, as the club slipped to a humiliating 2-1 FA Cup defeat at Worcester and were seven points off the pace at the end of the season. A pitiful 11,976 turned out for the last home game against Scunthorpe, the fans making it clear that their faith in former captain Phil Taylor, who had replaced Don Welsh as manager in 1956, was waning. 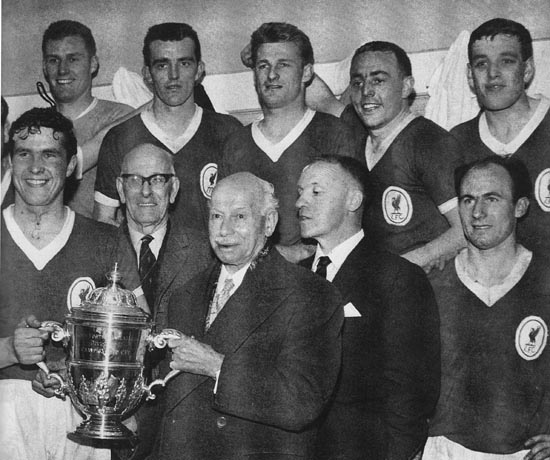 During the previous four seasons a number of players who could be described as adequate or inconsistent at best had come and failed to shine, such as Fred Morris and Jimmy Harrower. In the end it was free signing from a local amateur club, Roger Hunt who came from Stockton Heath, who would go on to the greatest heights but his introduction to the side in September 1959, when he scored against Scunthorpe United on his debut, was too late to save Taylor. By the end of November the Reds were tenth in the league and the Board acted to secure the services of Bill Shankly. His first two games in charge ended in a 4-0 and 3-0 defeat but he managed to rally the players into a climb up the table and another third placed finish, although still eight points behind Cardiff.

During his first close season in charge Shankly made some astute signings such as Alf Arrowsmith, Kevin Lewis and Gordon Milne but they still weren’t enough to gain promotion in 1960-61. The Reds were second on Boxing Day and remained in contention until the end of March, but just two wins in their last seven games saw them fall off the pace and finish a distant third again. The crowd again made their dissatisfaction felt for the last home game of the season against Stoke, which was attended by just 13,389, less than half the season’s average.

By now even Shankly was getting annoyed with a Board who were unwilling to put their hands in their pockets to sign the players who would take the club into the 1st Division. Luckily he had on hand Eric Sawyer, appointed by the Moores family to oversee the clubs finances and he could see that given the right players, Shankly could do great things for the club. Shankly identified Ron Yeats and Ian St John, two players who would give the side a great spine, as the final piece in his jigsaw. Sawyer told the other directors that Liverpool couldn’t afford not to sign them and the £37,500 paid to Motherwell for St John was more than double the previous transfer record, set a year earlier when Milne had arrived.

Liverpool began the season like an express train, winning ten out of their first eleven games with Roger Hunt finding the net eleven times. The new signings had adapted extremely well, St John never stopping running to make space for Hunt as well as being magnificent in the air despite his small height, while Yeats was a rock at the back. Even after that run came to an end with a 2-0 defeat at Middlesbrough Kopites needn’t have worried as the Reds responded by hammering Walsall 6-1 at Anfield in their next game.

Although the Reds had lost five games by the halfway stage they were eight points clear of third place Sunderland and had hit five goals at Anfield on four occasions. There was a slight blip over Christmas when they lost successive games in Yorkshire against Leeds and Rotherham, but they bounced back in style, remaining unbeaten until the end of March when they lost 1-0 at Luton. This unbeaten run had opened up a nine point gap on third place Plymouth with a game in hand and it was by now just a case of when, not if, promotion would be secured.

Initially 14th April 1962 looked to be the day that a return to the 1st Division could be sealed, with the Reds knowing that if they beat Swansea Town at the Vetch Field and Plymouth Argyle dropped points against Bury then that would be it. Unfortunately the game was called off due to a waterlogged pitch, but Plymouth’s defeat to Bury meant that if Liverpool beat Southampton at Anfield in their next game on Easter Saturday then they would be up with five games still to play, no matter what happened anywhere else. In reality the difference in goal average was so great that a draw would do, with a victory virtually guaranteeing the title.

Even a miserable wet day couldn’t dampen the spirits of the crowd as 40,410 turned out to see the Reds go for the jugular, Alan A’Court hitting the post in the first few minutes. Midway through the half Kevin Lewis, playing at centre forward instead of the suspended Ian St John opened the scoring, firing in a rebound after his first effort was blocked. On the half hour Lewis added another, scoring from close range after the keeper could only parry a Roger Hunt header.

Due to the appalling conditions the rest of the game was a scrappy affair but it didn’t stop the crowds enthusiasm and at the end most of them stayed in the ground after the players had disappeared down the tunnel, demanding their return.  They did so for a lap of honour, accompanied by St John. With many having invaded the pitch, the players then appeared in the Director’s Box, leading to the crowd beginning a rhythmic chanting and clapping of ‘Liv-er-pool’. After eight long years Liverpool fans could finally look forward to playing in the top flight again.

Two days later the players were back at Anfield for a home game with Stoke, a 2-1 win confirming they would be promoted as champions with Leyton Orient joining them. The Reds said goodbye to the 2nd Division on 4th May with a 4-2 defeat in the re-arranged game at Swansea, but by then nobody cared.

About the author: Steve has attended most home and away games since 1986 and has been writing for TLW since the very early days. He's a published author and has written several books about LFC and also the City of Liverpool. You can check out his books on Amazon, and follow him on twitter @SteHortonLpool