In the era of telegrams and long before e-mails Liverpool’s telegraphic address was “Goalkeeper”.  It might well have been “Centre-Half” – not “Centre-back” please note.  The Reds have had a distinguished tradition of central defenders right down to today with the classy Daniel Agger continuing that.

Not many clubs can boast of two players from the same club winning England caps in the same season as Laurie Hughes and Bill Jones did in 1950.  My memories of the ‘pivots’ as the Press used to describe them begin towards the end of the last war.  They were usually tall and always wore the number 5 to identify themselves in the absence of names.  Their role was to command the centre of the park, to mark the opposing centre-forward and occasionally come upfield for corners to add to the attack.

A famous example of a centre- half scoring came in the 1950 semi – final when Les Compton of Arsenal raced up the field to head a crucial goal against Chelsea to secure a place in the final against….Liverpool! But my concern is with our high Fives who have graced the Anfield turf over the last 50 odd years.  They didn’t all grace the turf in equal measure, however.  Older Reds will remember- with a shudder- an amiable, hopeless Yank called Joe Cadden and a beanpole South African called Gerhardi and in recent times the hapless Torben Piechnik..

The roll of honour must include Laurie Hughes, Bill Jones, Dick White, Ron Yeats, Larry Lloyd, Phil Thompson ( one of the first who could be called by the modern term’ central defender’), Alan Hansen, Mark Lawrenson, Sami Hyypia and Jamie Carragher. 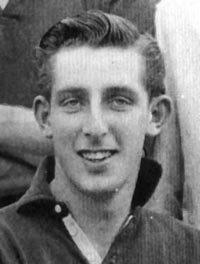 Laurie Hughes was Liverpool’s centre–half in the championship winning side of 1946-7. Signed in 1943 from Tranmere he played over 300 games for the Reds and was a member of the losing Cup Final team in 1950. Laurie was tall, elegant, very strong in the air and a dominant figure in the defence for many years. Tommy Lawton, the England centre – forward , rated him very highly. Just as Albert Stubbins was unfortunate in being contemporary with Lawton so Laurie’s misfortune was to be a contemporary of Neil Franklin of Stoke City (then a power in the land) also a tall, elegant player and a fixture in the England side.

Hughes only played for England once and, unluckily, it was in the infamous defeat by 1-0 in by U.S.A. in the 1950 World Cup when England missed at least a dozen chances and hit the woodwork three times. Laurie’s great years were undoubtedly 1946-51; after that the side which had claimed a title in 1947 and gone 19 games without defeat in 1950 was ageing and allowed to go downhill until relegation in 1954.  Laurie’s form suffered, partly because of injuries, and he retired in 1957.

He remains for me a class act, unfortunate not to represent his country more often at a time when international matches were less frequent than they are now.  An abiding memory is of Hughes limping on the left wing throughout the famous derby against  Everton in 1955, refusing to go off until the final whistle blew on a famous 4-0 victory over the old enemy. 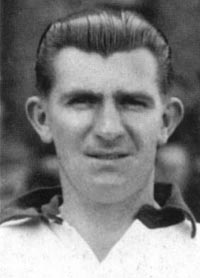 Liverpool were fortunate in the Hughes era to have the services of another talented centre- half, Bill Jones (grandfather of Rob Jones ). I believe Bill would have won more caps had he played more often at centre – half for Liverpool but he was the utility player par excellence, a type who doesn’t seem to exist in the modern game ( the nearest example I can think of is Chris Sutton of Celtic who played equally well (?) at centre forward and centre – back ). Jones played up front, at full- back and in all three half – back positions.

He was a solid, calm performer anywhere he played and never let the side down. In the 150 semi- final against Everton at Maine Road he replaced the injured Hughes at centre–half and played brilliantly. Even though Bob Paisley scored that day Jones couldn’t be left out for the Final when Hughes returned and Paisley’s disappointment is the stuff of legend.

On the day Jones didn’t play as well as he could but he wasn’t alone in that regard and my memory of him is of a big man with great skill who could always be relied on; the pity was that as Laurie and Bill aged the club had no long term strategy to replace them. In 1950 Jones played for England in the victories over Portugal and Belgium, replacing the injured Hughes – the 1949-50 Reds weren’t a bad side!

The long stay in the old Division 2 is an era somewhat neglected by historians of the club – understandably and perhaps justly. As one who lived through that period and has memories of trips to such exotic locations as the Old Showground at Scunthorpe, Gigg lane (Bury) and Carrow Road (Norwich) I can testify to seeing some appalling football but also enjoying the efforts of those players, notably Billy Liddell, who never gave up and gave us hope that one day the tide would turn. 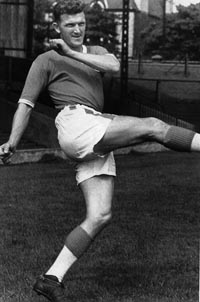 A great problem in the immediate post-relegation years was our leaky defence which shipped vast numbers of goals as quickly as Liddell and Johnny Evans were scoring at the other end. Gradually the situation stabilised and some credit for the improvement can be down to Dick White, signed from Scunthorpe in 1955 but not a regular until 1957. Dick was the traditional stopper centre – half, big and strong with no frills and the heart of a lion. Dick commanded the middle, could use the ball and was a good example as captain. He won the respect of the fans and could be relied to give his best always.

Lacking the finesse of Hughes or Jones he was, in that long transitional period, exactly what the club needed at the back to settle the defence. Lack of crucial pieces in the jigsaw meant that the ground made up under Phil Taylor (the Roy Evans of the fifties) was not converted into promotion until eighteen months after the coming of Shankly.

In Shankly’s second season he signed Ron Yeats who with Ian St. John was the foundation of the side which won promotion in 1963. Yeats was made captain immediately and although Dick White retained his place in the side, now at right back his days at centre-half were over and he left in the summer of ’63 and never played in the First Division. A good servant who had the fans behind him but who lacked perhaps the little bit extra needed to get us promotion.

The signing of Yeats and St. John was a defining moment in the history of the club. The modern Liverpool was born with their arrival in 1961. Yeats,  Shankly’s colossus, weighing 14stone  plus and 6ft 2 tall, was beginning to acquire a reputation at Dundee after only 28 games in their team.  Word was coming down to Liverpool of the giant who could outhead anybody, who was capable of ferocious accurate volleys and despite his height was quick and nimble on his feet. 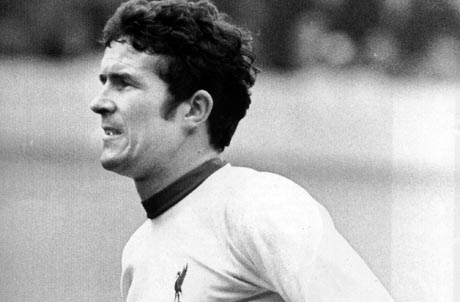 In his first season Liverpool won promotion and an abiding memory is of him leading the team off the field in pouring rain against Southampton in the game that clinched promotion. Yeats was, above all, an heroic figure, large and larger than life, whose destiny was to lead the club to the first Division Championship and the Holy  Grail – the FA Cup. He was the hero we had been waiting for to lift the Cup above his head at Wembley after a wait of 73 years.  And in 1965 lift it he did.

One of my greatest memories of following the Reds is of another wet day at Wembley when seated just below the Royal Box I saw ‘Rowdy’ hold the cup on high. 35 years later I felt exactly the same in the Millennium Stadium when Michael’s heroics defeated Arsenal. Yeats was an inspiring figure, a great captain by example, rarely outwitted,and maybe the best old-fashioned centre- half there has been.

A source of great satisfaction at the time was that much to the chagrin of the Blues their ‘Golden Vision’, Alec Young , never scored against Yeats in the Merseyside derby.  The big man was too quick for him and the ‘Golden Vision’ became so much Scotch mist when confronted with the colossus. Rowdy’s saddest moment in a Red shirt must have been in the European Cup-winners’Cup Final against Borussia Dortmund at Hampden when he deflected Libuda’s shot over the line in extra time to give the Germans victory.  The Cup-winner’s Cup remains the only European honour we never won .

The big man led us to three Championships and the FA Cup and after his arrival we never looked back.  At a time when Scots south of the border were looked upon with suspicion by the selectors, it was shameful that Yeats won only two caps for his country, two less than his successor, Larry Lloyd won for England.

Larry Lloyd must rate as something of a ‘one-off’ in the history of the club. Off-hand I can’t think of another Liverpool player who won Championship and European medals with us and repeated the feat after his departure from Anfield with another club. He was a member of our 1972-3 Championship and UEFA Cup winning side and actually scored in the first leg of the final against Borussia  Moenchengladbach. He left for Coventry in 1974 and after a  brief stay there was rediscovered by Brian Clough and went on to win Championship and European Cup medals with Forest.

Like Yeats before him Lloyd’s arrival at Anfield was a signal that one era was ending and another beginning.  After a Cup defeat at Watford Shankly decided it was time to rebuild and Lloyd’s arrival was part of that process. By the end of that season – 69/70 Lloyd was established in the first team and never lost his place until his departure in 1974.

Lloyd was the last of our old-fashioned centre-halves, big and strong, dominant in the air and tough-tackling yet, for me, lacking the charisma of Yeats or the elegance of Hughes or Jones. He was nevertheless reliable and brave and at the heart of Shankly’s second great side. He was also the last central defender to wear the number five shirt for many years; after he left Liverpool, in keeping with an international trend moved gradually into the system of two centre-backs and in their first season together Phil Thompson and Emlyn Hughes - our first pairing, wore numbers four and six respectively.

The era of  the single centre-half was over but the ‘high fives’ were reborn within the new tactical frame work.