After nearly two years, Britain's Bitterest is finally drawing to a close.  It began, at the very beginning as I described how they took the turnstiles with them as they left Anfield after John Houlding raised the rent.  So what better way to finish by paying tribute to their current icon, the Western Approaches most famous regular who it seems may have taken his hatred of the reds out from a school computer room!
When he was about 12 Rooney was invited to trials at Melwood, but it was never going to get off the ground.  When one of our coaches went round handing out kits he refused to take one, insisting on wearing the Everton one he'd turned up in.  Once the blues got to hear of him and expressed an interest, there was no point us pursuing it.
Since Rooney signed professional forms and broke into the team, the way he has acted in derby games has shown just how much he hates the reds.  Who can forget his petulance during his warm ups at Anfield last season and then when he came on he was one of the first to react when Gerrard went in with a two footed tackle.  In the two Goodison games that we have won with ease, his agonising facial expressions have been a picture as he has struggled to come to terms with how shite they are.  This season he was lucky to last the ninety minutes given the way his tackjles were flying in. 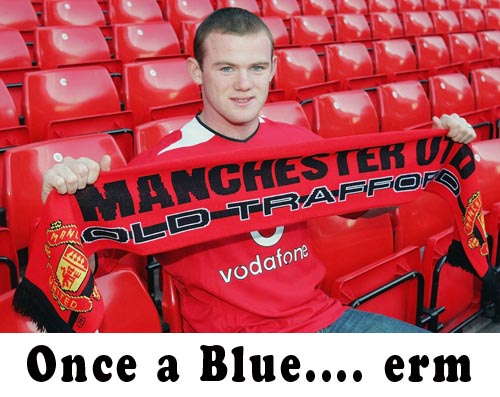 So if he can't beat us on the pitch, he has to try it off it instead.  In the summer of 2002, a caller rang a radio phone in claiming to have seen Rooney fighting with a red whilst on holiday.  But the most bizarre incident may have come shortly before then whilst he was still a pupil at De La Salle.  Around that time, someone would log into the TLW forum as 'Gary Jones' and dish out lots of abuse to users, including the usual 'murderers' jibes.  The site administrators did some digging and traced the ip address to Rooney's school.  When they threatened to inform the school, 'Gary' pleaded with them not to, saying that he only had a few weeks left and didn't want to be expelled.  Or maybe he didn't want his identity made public?
It couldn't have been him, or could it......
Steve Horton