Everton were league champions in 1915 and 1939 and in both cases football was suspended soon afterwards due to the 1st and 2nd World Wars. On both occasions, Everton failed to pick up where they left off and had some seasons of mediocrity, while Liverpool did fairly well when peace resumed.

The Blue allegation is simple, that the German leaders at the time were RedNosedBastards who deliberately instigated world wars to stop Everton enjoying further success and allow Liverpool plenty of time to regroup.

If they listened to the truth, they’d realise that both the title wins in question were highly dubious in the first place. In 1915, with most other teams concerned about the war effort and losing their players to the trenches, Everton sneaked the title with a total of just 46 points, the equivalent of 65 today.

Only three points separated the top seven teams and their winning total makes them the weakest champions of all time, but nobody was interested anyway because of the war.

When organised football resumed in 1919-1920 and teams cared, Everton’s frailties were highlighted as they finished 16th. Liverpool, on the other hand slowly built a solid team and won the championship in 1922 and 1923. This gave Liverpool four titles to Everton’s two, but had the Kaiser not intervened they say they would surely have dominated in 1916-19, even though the statistics show how shite and lucky they had been.

When Everton won the title in 1938-39 their star player was Tommy Lawton, who was 20 years old and had a bright career ahead of him. Blues claim that Lawton would have won them many more titles, but a closer look at the facts tells how fortunate Everton had been to win the title in 1939.

They lost 12 games that season, a record number of defeats by any title winning team ever. These defeats included a 7-0 thrashing at Wolves and 4-1 home loss to Charlton. When the war ended in 1945 Lawton could no doubt see what a load of losers he was with and signed for Chelsea, to the dismay of Blues fans.

Blues totally dismiss Liverpool’s 1946-47 success, saying that it was a lottery as players had only just been demobbed. They are right in respect of the demobbing, but Liverpool’s board had the foresight to take the players away to the USA in the summer of 1946. Fresh from a month in a ration free country, they had camaraderie and were fit and raring to go for the new season.

So despite the Everton teams of 1915 and 1939 being amongst the worst ever champions, their fans continue to claim that they could have won many more titles than Liverpool had German dictators not intervened. They may even point to the folklore that says Hitler’s once lived in Liverpool as a possible time when he could have stood on the Kop.

But even then their argument becomes flawed. A recent book claims that Adolph Hitler spent some time living with his brother and sister-in-law in Toxteth in 1912 and 1913, while attempting to dodge being drafted into the Austrian army. It is alleged that he took up an interest in astrology while here and went to visit a Mrs Prentice. 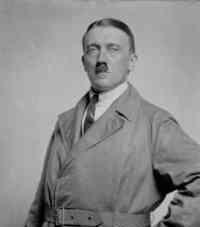 Now I’m not suggesting anything now but Prentice is also the surname of the Blues correspondent for a local paper, someone who bears a lot of grudges. Given Hitler’s irrational nature, perhaps Mrs Prentice played with other types of balls as well as crystal ones during Adolph’s visits, if you know what I mean. If that was the case, then he certainly can’t have been a Red!