Part One - The Leaving of Anfield

Evertonians bitterness to all things Liverpudlian started before our great club even existed.  Prior to founding Liverpool, John Houlding was a major financial player in the running of Everton and acted as letting agent for Anfield, which they rented off a local brewer, John Orrell. Houlding was also in the licensed trade and his pub, the Sandon, was used as the club's headquarters.

In 1892 Everton members were so incensed that he tried to raise the rent on Anfield and then sell it to them for personal profit that they broke away and bought the land that became Goodison Park instead. 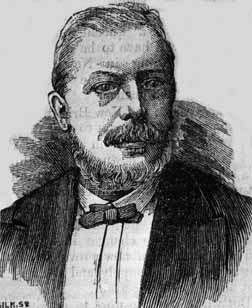 Hou threw the blues out

Their hatred towards Houlding continues today, with Everton's recently resigned independent supporters club spokesperson Ian McDonald referring to him as the 'despotic owner of Anfield' in an article for a blue fanzine in December. Looking in a thesaurus, I found that another word for despotic is 'tyrannical', which means to act like a tyrant.

According to Tony Blair and successive American presidents, Saddam Hussein is a tyrant, which makes McDonald's wording a bit cruel and begs the question, just what did Houlding do to enrage them so much? The truth is that both Blues and Reds should be eternally grateful to Mr Houlding, for he was a very generous man.

After initially playing on an open pitch in the middle of Stanley Park after they were formed in 1878 (notice Evertonians didn't have a problem with someone playing on public parkland back then!), Everton decided to look for a gated enclosure so that they could charge admission fees.  A man named Mr Cruitt offered them use of his land off Priory Road for the 1883-4 season, but the increasing crowd noise led to him booting them out as it was disturbing the 'pastoral serenity' of the neighbourhood.

In stepped John Houlding, who arranged to lease Anfield from John Orrell for the sum of £100 per year.  Anfield, quite frankly, was in a mess. According to Tityrus of the Athletic News, the pitch was 'a worn parterre' and contained 'about three blades of grass'.

Houlding immediately set about advancing funds to the club so they could build stands on both sides of the ground, with uncovered benches behind the goals. He also allowed them the use of his pub, the Sandon for changing facilities and to be used as club offices. These new facilities attracted bigger crowds and were a major factor in Everton seeing off the challenge of Bootle FC who had held the upper hand in Merseyside until then.

In their first season at Anfield, Everton's income from gate receipts rose four fold and they went from strength to strength, becoming one of the founder members of the league in 1888, champions in 1891 and regularly attracting five figure crowds. Facilities at Anfield were so good that it was used as a venue for an FA Cup semi final and an England international.

In their championship winning 1890-1 season they made £1,700 profit, but their rent remained the same meagre £100 per year that they were paying when it was a cabbage patch.  Were Everton grateful to Houlding for doing so much to help them get started? Were they hell!  Members of the board objected to him having a monopoly on refreshments at the ground, taking exception to the fact that business in his pub was booming due to it being a very popular watering hole with home and away fans alike.

Seeing that the club were spending all their increased earnings on everything except paying him back the money he had so generously lent them a few years earlier, Houlding tried to raise the interest on the loans and they went ballistic.  He then tried to increase the rent on the ground to £250 a year, which they again refused to pay.  Patience wearing thin, he bought a parcel of land next to Anfield and offered them the chance to buy this land, as well as Anfield (which Orrell still owned), for £6,000, meaning he would finally recoup all his money.

Rather than accept this offer, Everton decided instead to pay £8,000+ for Mere Green, which was re-named Goodison Park and spend another £3,000 on making it suitable for 1st division football. When they shipped out of Anfield, they were so bitter that they took the turnstiles with them.

Now if John Houlding was the greedy landlord that he is made out to be by Blues, you would think he'd have then sold his land to one of the many builders in the area who were throwing up terraced housing left, right and centre.

Instead he formed Liverpool FC and immediately gave them £500 to find new players. Later in life he would say that the reason Everton left was that some club members couldn't handle the Sandon playing such a big part in its affairs. This was because teetotal fanaticism was gripping the club, a faction that has obviously been weeded out today when you look at their current playing staff and list of past managers.