Howard Kendall is not the first ex Blues manager to feature in Britain's bitterest. A previous issue showed how Joe Royle has been expressing his bitterness to us since 1985-6. But there are crucial differences between Royle and Kendall.

Royle has always hated us, but he remains employable and for all intents and purposes gets on with things, just getting obsessed with us when our paths cross.

Kendall, on the other hand, having been out of management for some years, continues to wallow in self pity and blames the Reds for nearly everything. That makes him unique, as he is the bitterest of the bitterest.

Having had less than spectacular managerial spells away from Goodison at Man City, Notts County, Sheffield United and Xanthi, Kendall now makes his living from the after dinner speaking circuit and his Echo column. He comes quite cheap on the speaking front, but he certainly makes sure he gets his share of the free beer on offer. 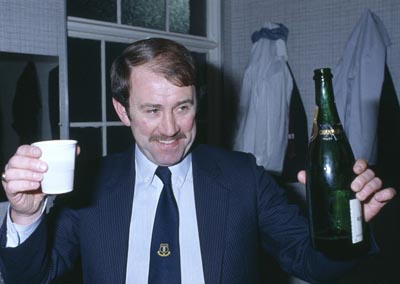 But it is his Echo pieces that provide the best source of amusement for Reds fans, as they demonstrate he is clearly losing the plot. As expected, when derby games come around, he's always there with a little dig.

This season he talked about Don Hutchison's disallowed 'goal' in 2000 that denied them a last minute win. The fact that Hutchison was about two yards from Westerveld when he took a free kick instead of the regulation ten seems to have totally been lost on him.

Kendall's bitterness in his rants is quite sad, as he has a widespread knowledge of the credentials of most top flight players in Europe. But despite being an ex manager of Everton, Kendall seems to think he can have an opinion on Reds matters when he wants to. He has brought up the subject of Owen playing for England for example.

However his most spectacular Liverpool related piece came in April 2002, when Anfield was chosen to stage England's friendly with Paraguay. "Whats wrong with Goodison Sven?" screamed the headline of his column.

Well, there are so many things wrong with it I wouldn't know where to start, but Kendall's sourness knew no bounds. One of his justifications for Goodison being used for England was that it hosted World Cup games in 1966. Dear dear dear. So were White City, Ayresome Park and Wembley, which have all been demolished.

If Kendall really thinks the national team should use Goodison not Anfield when it plays on Merseyside, someone really should have a word.

Most comically, he somehow managed to trace the FA's decision to selecting Anfield as an international venue to Heysel, saying that Everton have been treated shabbily for too long and it all goes back to the ban.

Kendall has regularly used Heysel as a stick to beat Liverpool with, saying how he could have won the European Cup with Everton if it hadn't happened.

He also claimed that when English teams were let back in Europe in 1990, Everton should have been given some sort of wild card entry. You don't hear Luton, Oxford and Wimbledon screaming, even though they have fared far worse since.

At least Everton have stayed in the same division since 1985, the way Kendall talks you'd think they'd fallen down to the Conference.

But Heysel is just a smokescreen for the real reason that Kendall hates Liverpool. The truth lies in his transfer to Everton from Preston back in 1967, which he has covered in his autobiography, unimaginatively titled 'The Howard Kendall Story'.

You see, Kendall had at first looked all set to join Liverpool, but the move broke down, much to his disappointment. We had already signed Gordon Milne, Peter Thompson, and Dave Wilson from Preston that decade and Preston got cold feet, fearing fans would accuse them of setting up a feeder club arrangement.

So Kendall's move was called off and we signed Emlyn Hughes instead. Everton then stepped in for Kendall, posing him an immediate problem, as he had to trade in his beloved red mgb car or have it trashed by his new fans.

So there you have it, Kendall had a mildly successful career with the Blues, but could have had an even better one with us and not had to sell his first car. That's why he remains so bitter today.