Liverpool Football Club have never been shy about spending money when it was considered a good investment for the future of the club.  In three consecutive summers we saw the arrivals of players who all cost around the £20m mark in Fernando Torres, Robbie Keane and Alberto Aquilani. Prior to Torres, our previous record was £14m for Djibril Cissé in the summer of 2004, which in turn was much higher than the record figure before that.

Those numbers are so large that it’s hard to believe that a little over thirty years ago it was unheard of for any player to be transferred for a fee of anywhere close to £1m. In fact, going back forty years to June of 1967, Tony Hately was signed from Chelsea for a staggering sum (at the time) of £96,000. That’s as much as some Premier League players are now earning per week! Only a year after that big money move, in September of 1968, Alun Evans became Britain’s most expensive teenager with a transfer from Wolves to Liverpool for an even more astonishing fee, and became the first Liverpool player to break the £100,000 barrier.

Obviously there was a rapid (insane?) escalation in transfer fees from 1975 to 2000, so it isn’t fair to compare the fees paid for players that were signed twenty or thirty years apart. But, it should be fair to look at the fees paid during a shorter period and see how they compare. Going back to the 1970’s, the typical fee for a player such as John Toshack, who signed from Cardiff City in 1970, was £110,000.

Later in the decade a player such as Graeme Souness was able to command a fee of £350,000 from Middlesbrough in 1978. The question that automatically arises now is: how did those transfer fees paid by Liverpool compare with those paid by other clubs for players during the same time period? A few examples will show that they were certainly not out of line.

It wasn’t to be too long after that, in February 1979, when Trevor Francis became the first £1m transfer when he was signed by Brian Clough at Nottingham Forest, and then the money madness really began.

Any manager can spot a talented player who’s already established at another club, and it’s a given that such talent is going to be expensive for a manager to bring in. The difference between a good manager and a great manager is one who can spot talent in the making, or is otherwise hidden, and bring those players into the club at a much lower cost than the more proven but much more expensive players. It’s possible that with enough money, any manager can buy his way to success by simply identifying quality players and then bringing them in no matter what the cost (I’m trying hard not to think of anyone in particular here).

It’s a completely different story for a manager with limited money, who has to spend wisely by looking for “bargain” players, who are ones that may not be at the highest level at the moment, but will be once they are brought in to the side and then developed.

The main success of Liverpool in the transfer market during the 1960’s, ‘70’s, and ‘80’s was the ability to identify particular players who would be capable of fitting into The Liverpool Way, and with not so much regard to their current status. Many of those players were somewhat undervalued by their own club, and underrated (or not even noticed) by other clubs. Those were the ones who turned out to be bargain priced players that went on to greater glory once they joined the Reds. Some examples that come easily to mind are Alan Hansen in 1977 (£110,000), Ronnie Whelan in 1979 (£35,000), Bruce Grobbelaar in 1981 (£250,000), and Rob Jones in 1991 (£300,000).

The task for this Liverpool XI is to find a complete squad of bargain priced players, with a total budget of less than about £1m (or an average of around £100,000 per player) and see what we can come up with. If we’re lucky, we’ll have a squad that will be competitive with other clubs of the same era. Of course, the best period to begin the search is going to be the late 1960’s to late 1970’s, with transfer fees for top players typically (as shown above) well above £200,000 – i.e. double my budget here.

The first bargain to look for is any player who comes in with no transfer fee. Two of those players that I’ll select are Tommy Smith and Ian Callaghan. Both of these two came directly into the club through the apprenticeship system, in the days long before the Academy was in place. That gives me two players to begin with, and no cost to my transfer budget. The next best thing to free is to look for relatively unknown talent that may be available locally, which I can find with Steve Heighway playing amateur for Skelmersdale and Jimmy Case with South Liverpool. The two together wouldn’t even cost me my average per player figure of £100,000, and I’ve already signed up four players to my final XI.

Inevitably I’m going to have to start spending some big money somewhere, but if that’s the case then at least it should be done as wisely as possible. Local lad Terry McDermott can be signed from Newcastle in 1974 for £180,000, and Ray Kennedy is available for the same price from Arsenal, also in 1974.

As always, I’ll have to think about a few players to add in to make up a sizeable squad, so with the same strategy I’ll add local lads Phil Thompson and David Fairclough, who came in as youngsters with no transfer fees. Then, with an eye for more bargains I’ll bring in Alec Lindsay who signed from Bury for £67,000 in 1969. I’ll also put a couple of youngsters on the bench with striker Alan Waddle who transferred from Halifax at age 20 for a fee of £40,000, and reserve goalkeeper Peter McDonnell who signed from Bury in 1974.  That should give me a pretty good squad to work with.

As for a manager, I can’t think of a better bargain than Bob Paisley who came to the club as a twenty year old from his youth club Bishop Auckland in 1939. He spent his entire playing career with Liverpool, and upon retirement in 1954 he joined the coaching staff as a physiotherapist. That’s effectively two jobs done by one man, and it doesn’t come much better than that. Well actually it does, since Bob later became Bill Shankly’s assistant and then replaced the legendary boss when he retired in 1974.

Along with Bob we’ll put Joe Fagan on the bench as his assistant. Joe is another long term Liverpool man, who joined the coaching staff in 1958. Joe worked his way up through the ranks, becoming Bob’s assistant in 1974 when Bob moved up. Finally, I’ll put Ronnie Moran in there as a coach. Ronnie is another one-club-man who came to Liverpool as a youth player/apprentice, signing professionally in 1952, and later becoming a full member of the coaching staff in 1969. Between the three of them, by 1974 when Bill Shankly retired, they had a combined total of 73 years of service to Liverpool, with 39 of those years on the coaching staff. Not one of them left the club until retirement, which eventually added up to a total of 117 years! That kind of loyalty to the cause costs nothing in money but is priceless in value.

The total transfer fees paid for this eleven is less than £700,000! The astute reader may have seen this eleven coming for some time since I began rambling on about all of the above players, since this is precisely the eleven that won Liverpool’s first European Cup in 1977. If we add the five who were on the bench (David Fairclough, Alec Lindsay, David Johnson, Alan Waddle, and Peter McDonnell) we surprisingly add just a little over £300,000 with David Johnson taking two thirds of that total when he signed a year earlier for £200,000 from Ipswich.

Still, it makes it possible to put together a squad capable of winning the European Cup for less than £1m, or an average of considerably less than £100,000 per player, when typical transfers for top players were commanding more than twice as much. If we then add in John Toshack and Phil Thompson, for an additional transfer cost of £110,000, then we have the squad that also won the League that same season as well as finishing as FA Cup finalists. And if that doesn’t show the genius of both Shankly and Paisley, then I don’t know what will. 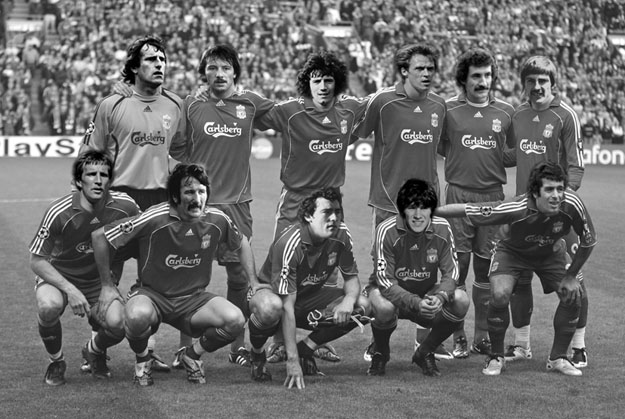