If he was judged on his first few months at the club, ‘Crazy Tony’ would be a candidate for worst LFC player ever. Nightmare performances away at Norwich and in the FA Cup at Burnley were as bad I’d seen from a Liverpool player in a long time. But then it shouldn’t have been much of a surprise. He was included in the deal that took Michael Owen to Madrid, but he wasn’t Rafa’s first choice. Or his second, or third. In fact, the rumour is Rafa didn’t ask for him at all, but Madrid made us an offer of £8m, or £8m & Antonio Nunez.

Rafa took the offer, as the player’s wages were low, and it represented a risk worth taking. Nunez had played for Madrid’s first team a few times, but was usually a member of their B team. I’d convinced myself (without anything whatsoever to base it on) that Nunez was going to be a revelation. No-one expected anything of him, so for some reason I decided he was going to surprise everybody and be some kind of Luis Figo. I reasoned that no matter how good he was he wouldn’t have got a chance at Madrid, because he wasn’t a ‘Galactico’ and he was competing with Figo and Beckham for a place in their side.

That was a fair point, and may have been one of the reasons he didn’t get picked at the Bernebeu. The fact he was pretty poo was another reason. Antonio’s Anfield career got off to a nightmare start when he picked up a knee injury in training on the day he was due to make his debut for the reserves. It didn’t get much better even when he was fit, as Nunez and compatriot Josemi failed to match the high standards set by fellow new Spanish arrivals Xabi Alonso and Luis Garcia.

But wheras Josemi got worse and worse, Nunez slowly seemed to come to terms with English football, and made a significant contribution in the closing months of the season. He was excellent in a memorable Anfield derby win, when the reds lost three players to injury in the first half, and also had Milan Baros sent off after the break. Nunez worked his bollocks off and really stood up to the blues’ physical approach. Other notable contributions were the header that led to Mellor’s goal against Olympiacos, and he also scored in the League Cup Final against Chelsea after coming on as a sub.

The abiding memory I’ll have of ‘Arthur’ however, is from the Chelsea semi-final. We were under the cosh late on, and Rafa introduced Nunez on the right to give us some fresh legs on the counter attack. Every time he got the ball, he just got his head down and ran in a straight line towards the corner flag. He did it brilliantly, and used up valuable time whilst giving the defence a breather. That summed him up for me. Not the most gifted, but someone who did a job. 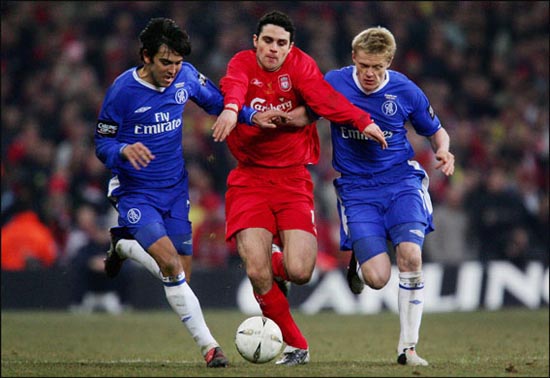 "Stand back, there's a Hurricane coming through"

Just when it seemed he was settling in at Liverpool, Rafa accepted a bid from Celta Vigo and Nunez returned to Spain after just one season at the club. He left with a CL medal in his pocket though, and some fond memories of his time in L4. The nickname ‘Arthur’ incidentally, came about because there’s a guy in the Main Stand who insisted on calling him ‘Arthur’. When it was pointed out to this fella that his name is in fact Antonio, he replied ‘Well he looks like an Arthur’. He does too you know.