Suarez: I did not want to leave the house after Liverpool defeat - Page 2 - Latest News - The Liverpool Way Jump to content

Suarez: I did not want to leave the house after Liverpool defeat

Luis Suarez has opened up on the pain that he and his Barcelona teammates felt in the aftermath of their dramatic collapse in the second leg of the Champions League semi final tie against Liverpool.The once-adored Reds striker turned public enemy number one, due to his antagonising antics throughout the two legs which included a running battle with Andy Robertson who did not take a backward step throughout.Speaking publicly on the unforgettable Anfield night for the first time, the Uruguayan gave a fascinating insight into the aftermath.The Mirror (via Fox Sports Argentina) reported Suarez as saying:“It was days, weeks, that we who loved to take the kids to school, football, activities, we suffered ... I did not want to leave from home after losing.“It was very complicated. I really had a bad time, like most of my team-mates.

“We had already learned the previous year that we could have such a 3-0 result in our favour, but football has that.

Suarez said that the outstanding frenzied atmosphere that the Anfield crowd was able to generate that night played a major part in the events that followed.The star striker also admitted that a sense of fear rapidly spread amongst the visitors, and the Catalan giants simply couldn’t cope with what they were up against. 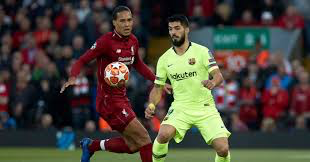 “We knew how Anfield was going to be and how tight the stadium was, I told the teammates and everything."It is not necessary to take away merits from Liverpool, which pushed the fans.“In five minutes they had two situations, at 15 minutes they already won and that enters you, it generates a nervousness.“Then you see that a teammate loses the ball, another loses two more balls, and that leads you to an awkward situation until in the second half it goes out as it came out.“The Champions League has that, if you go out 30 seconds relaxed, they pass you by. “At the group, institutional level and as a human being this kind of defeat is suffered."It is a night that still gives any Liverpool fan goosebumps as well as putting a beaming smile on their face.And it makes it all the better to read the kind of impact it had on our opposition. Football is a game played above the shoulders, just as much as what talent you may possess on the pitch.If you enter a game with a wrong attitude, you are going to pay the ultimate price.If we are to meet Barcelona again in the near future, having any kind of psychological advantage can be priceless.