The January transfer rumour mill has produced another name to the mix of possible signings for the Reds.The Mirror reports that Liverpool along with Lyon are looking closely at Villarreal winger Samuel Chukwueze who has impressed many by his development in La Liga.The 20 year-old Nigerian international who was part of the U/17 World Cup winning side for the Super Eagles in 2015, joined the Yellow submarines’ youth set-up two years later and graduated to the senior squad for the 2018/9 campaign. 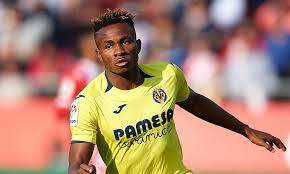 So far he has made just over 50 appearances for the club scoring 11 goals in all competitions with his performances playing a big part in them staying in the top flight last season.The UEFA website had Chukwueze on their 50 young players to keep an eye on this season, describing him as a “ Precocious winger with Europa League experience.”His style has been likened to former Chelsea and Bayern Munich star Arjen Robben and in a interview with Goal said he is a player that he has specifically looked to model himself on.“ He’s the king, to me.“He’s the perfect player. I watch so many YouTube clips of him, and there are so many things I can learn from watching him.“On the way to games, even now, I will still stick on clips of Robben and watch his goals, his dribbling. He’s my inspiration, one of the greatest. “I like to be me, and of course you have to be yourself, but you need to learn from people like him. What a player!”But just like any professionally run club, it isn’t just the present that Liverpool are concerned with as they cast an eye to the future.The Mirror (via Goal) report some of the names on their hit list include English international Jadon Sancho, Sevilla defender Diego Carlos, Bayer Leverkusen's Leon Bailey, and teenagers Sandro Tonali of Brescia and 17 year-old Liverpool born youngster Joe Gelhardt  who is currently at Wigan.Certainly something to keep an eye on in the months ahead.