Brighton have identified Nat Phillips as a prime target to replace the recently departed Ben White.

The highly rated 23 year-old is set to officially become an Arsenal player when he completes his medical after returning from his summer break.

The proposed fee is believed to be in the region of £50 million and the Seagulls are naturally keen to spend a chunk of that on a replacement.

Talksport reports that Phillips is firmly in the frame to be that player with Brighton preparing a bid in the region of £15 million.

After spending a season at Stuttgart, in his own mind the academy graduate would have been preparing for another spell away from the club.

But as the injuries mounted in the heart of the defence, Phillips was called into action.

While it was a season full of inconsistent performances, one constant was the commitment to the cause of the big Number 47.

To the fans watching on at home Phillips became a cult-figure, winning headers like a seasoned pro and often showing the scars of battle with big centre forwards like a badge of honour. 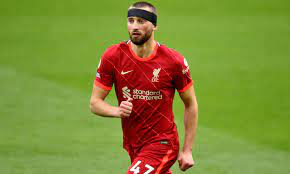 In all, Phillips made 17 league and three Champions League appearances for the season scoring a trademark power header against Burnley in the penultimate game of the season.

With the likes of Virgil Van Dijk, Joe Gomez, and Joel Matip returning to full fitness and the signing of Ibrahima Konate, Liverpool have reportedly told the 24 year-old that he is free to leave the club if a opportunity for regular first-team football presents itself.

It is not the first time that Phillips has been linked to other clubs with Newcastle and Burnley previously showing an interest.

Phillips has openly spoken about his future once the season concluded saying that he is not one to shy away from a challenge, but he also has to do what is right for his own career.

“If you want to play as often as possible, you need to embrace that fight and play to a high enough standard to hold off such competition.

“Even though there is a lot of competition, I see it as another person to try and learn from. A new person’s game I get to see up close, see how they play and see if I can take anything from that.

“At Liverpool there is always going to be high competition for a place on the pitch. No matter who you are, you don’t have a right to play for them and certainly not myself, having only played a handful of games when the new boys came in.

“I still need to have the conversations with them and just see if there is a role for me there and what role they would want me to play.

“I would then have to decide what is best for myself off the back of that.”

While it would be a shame to see Phillips depart, in terms of his own career it will be a great move and a environment that you can see him flourishing in.

And with Liverpool reportedly having to sell before they buy this summer, any fee can be put towards shaping the squad for the upcoming season.