Origi: We really enjoy to play for Liverpool - Latest News - The Liverpool Way Jump to content

Origi: We really enjoy to play for Liverpool

Divock Origi proved once again that he is a Derby specialist after grabbing a double against Everton in Liverpool’s 5-2 win over Everton at Anfield on Wednesday evening.Jürgen Klopp juggled his pack to great effect giving rare starts to the Belgian, Xherdan Shaqiri and Adam Lallana as Roberto Firmino, Jordan Henderson and Mo Salah watched on from the subs benchOrigi looked sharp from kickoff and was the beneficiary of some wonderful play further up the pitch from Sadio Mane and Dejan Lovren to tuck his chances away with aplomb, while Mane and Shaqiri also piled on the misery for the beleaguered Blues in the first 45 minutes.The four goals were the most scored by a Liverpool team in the first half of a Derby since 1935, and the emphatic victory saw a club record broken for most games unbeaten in the top-flight (32).With his two goals on Wednesday, Origi has now scored five times in just six appearances against this particular opponent for the Reds.

The Official site ( via Amazon Prime) reported Origi as saying:“ It's a special atmosphere, a special game. I think as a team we just enjoy it.“There were a lot of goals today and we showed that we really enjoyed to play for Liverpool." 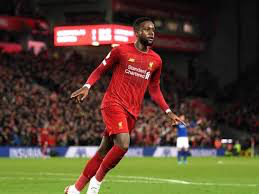 Origi was delighted that he was given the opportunity by his manager.“The manager showed us trust and we just tried to repay it as much as possible and get the three points.“We know it's important for our season. It's an important game, it's special, you can hear it. I'm so happy.

"The chief nemesis of Everton gave a description of both goals, paying full tribute to his teammates."I think the first was important just to break the game open."I think second one, I enjoyed that."It was a great pass from Sadio for the first and [then] a wonderful ball from Dejan.“We used the spacing well, that's one of our weapons in going in behind and then we just tried to do it. “It was wonderful service and that was good today."