Klopp: Thiago could play in any team and be the best player

Jurgen Klopp has given Thiago Alcantara the ultimate tribute by saying that the midfielder could fit into any team at domestic or international level.

The 31 year-old is what every manager dreams to have in their team.

In true terms he is a born winner, having collected honours wherever he has played be it at Barcelona or Bayern Munich at club level and in international Football for Spain from the U/17s through to the seniors.

They say that the best players can dictate terms and make the game be played at their tempo, and Thiago is certainly in that bracket with his ability to pinpoint a pass with his delightful technical quality.

When Klopp signed him for the Reds at the start of the 20/21 season for a bargain price of £20million, there was a thought especially amongst Reds fans that he was the missing piece in the midfield.

But the midfielder endured a stop-start campaign due to Coronavirus and then being crocked in the Derby by Richarlison which set him back a few months.

Naturally rusty on his return, and with the team struggling with poor form and a large list of absentees, there was some questions raised whether English game suited his skillset.

This season has seen Alcantara suffer heartbreak in a footballing sense as he was ruled out of the Carabao Cup final after injuring his thigh in the warm-up.

Since his return to full fitness, the savvy veteran has shown the footballing public in this country what his true worth is by producing a number of midfield masterclass performances. 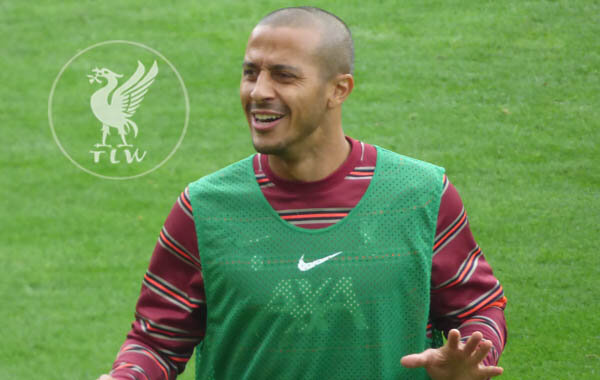 “In the shape he is now, Thiago could play in each team in the world.

“In fact, not only would he play in it, but he would be the outstanding footballer.

“All Thiago needs is to be fit and to gain some rhythm, and then he shows his best football.

“Physically, as long as he’s in the right shape, he shows everyone how good he is and he was injured when he arrived here."

Thiago has not been picked for his national team since playing in the delayed Euro 2020 tournament last July.

While they are lucky to have a number of options, Klopp reiterated just how big a asset a fully fit Thiago is.


“Of course, Spain have a lot of options and are an incredibly talented football team. At this moment, Thiago is showing his best football and is the outstanding footballer.”