Jurgen Klopp is running out of superlatives to describe the tremendous spirit of his side after seeing them score yet another late winner against Newcastle on Saturday evening.Coming on to replace the injured Mo Salah who suffered a severe head knock after colliding with the hip of Newcastle goalkeeper Martin Dubravka, Divock Origi was in the right spot to convert a pin-point free-kick from fellow substitute Xherdan Shaqiri.The overall depth of Liverpool's squad has been questioned in previous seasons, but this campaign has seen 12 of their goals come from the substitutes bench which is a league high.The reaction of Jurgen Klopp was a mixture of pride and joy and was thrilled by the combination of the winning goal.

Sky Sports reported Klopp as saying"So crucial. It's just brilliant, it's a like fairytale."You can say whatever you want about me - I don't play Divock enough or Shaqiri enough - but then I make this decision and it's great. I love it. It was really a big moment."It was a wonderful free-kick from Shaq and a sensational header from Divock won us the game now we've qualified for the league final, which is brilliant.Klopp who is a eternal optimist, always felt there was always time for his side to get the winner."I didn't feel like it was over. "I accepted long ago that we do everything, absolutely everything. The boys throw whatever they have on the pitch. "Whether we are champions or not it's destiny, we cannot do more."The boys tried everything to win the game, we tried to have influence. I really think it was deserved. I really loved how calm the boys were."They showed in each second that they really wanted to win it, we knew what we had to do and the boys did it in a very difficult game."Klopp was in a reflective mood in what has been a terrific campaign for the club, and wanted to give credit to some unsung heroes, his backroom staff for the way they plan set pieces, "It came to fruition for the first goal of the game by Virgil Van Dijk."Our goal was wonderful, Peter Krawietz and Greg and James our analysts, the work they do on set pieces is incredible. "It's really nice to see Virgil get free in the box.It has been a season where the Reds have had to battle hard for their success and very few wins have come easy.Such was the case against Rafa Benitez's tenacious side who made them fight all the way.

Klopp was thrilled with the competitive nature of his side. 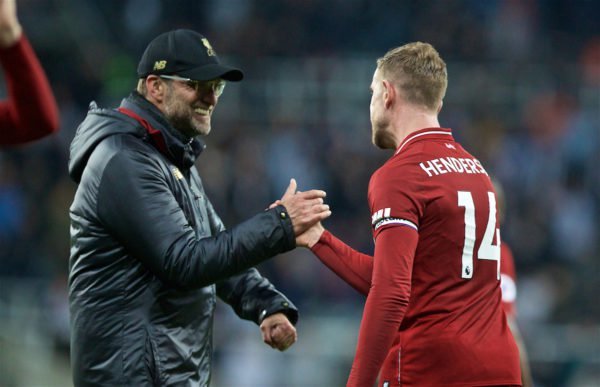 "It's brilliant, so deserved, it was a tough game against a physically stronger team than us.

" The way Newcastle played, it was just difficult to deal with in general."It's really difficult to defend all these situations and we cannot defend them, it kept them in the game."

The manager has no doubt that his side can continue in the same vein for the last week of the season."We are not the best team in the world and we have to work hard. There are no easy games and now at the end of the season we have three games in six days."I didn't see anyone being nervous, we just tried it, no silly fouls, just really clear, it's an important lesson for us that we can deal with that like this."