Klopp: I will never compare to Shankly - Latest News - The Liverpool Way Jump to content

Klopp: I will never compare to Shankly

Liverpool broke a near-on 50 year record in their hard fought 2-1 win over Bournemouth on Saturday with their 22nd consecutive win at Anfield.Despite the outstanding achievement, Jürgen Klopp was keen to distance himself with comparisons between himself and the man who was in charge of that side in 1972.The one and only Bill Shankly.ESPN reported the manager as saying:"Great, I think it was 22 [consecutive home wins] today.

"We didn't think about the number before the game, but after the game we can think about it for a couple of minutes.

"It's nice. It's absolutely nice. It's special, not normal."“Oh yes, I will never compare with this fella (Shankly). 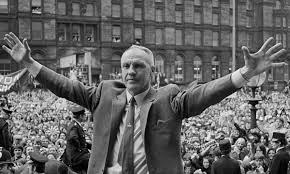 While that may be the case, Klopp sits very comfortably at the table of legendary Liverpool managers and while his team hardly produced what you would call a vintage performance, it is one step closer to a long awaited title.The reaction of the German after the final whistle told a real story of how big the result was in the context of what had occurred in the previous few games and what lies ahead.“Today is an example: we have to fight hard. We are not geniuses, but we can really fight until the end of the season, and then we'll see what we get for it."The focus now switches to Wednesday evening and the challenge of overturning a 1-0 first leg deficit against Atletico.Klopp hinted at positive ness on the injury front in regards to the skipper.“Hendo was out, I don't know exactly in this moment, but I think he will train tomorrow. “If that looks good, I have to make a decision,"“For sure it will be good to have him back."