Klopp: Great result against Genk but we can do better - Latest News - The Liverpool Way Jump to content

Klopp: Great result against Genk but we can do better

Jurgen Klopp was pleased but not entirely satisfied with his team after a 4-1 Champions League victory against Genk on Wednesday evening.After a searching test from Red Bull Salzburg on Matchday two, Klopp was certainly taking nothing for granted especially as the visitors were looking for consistent away form in the competition.If there has been one thing missing from Liverpool’s body of work of the past 12 months, it has been the attacking drive from midfield, and the absence due to injury of Alex-Oxlade Chamberlain was a main reason for that.This season it has been a steady build for the 26 year-old, and those minutes culminated in a terrific individual performance scoring a double which displayed his all-round quality that he brings to the Reds.Sadio Mane and Mo Salah also were on the scoresheet with goals which illustrated the telepathic connection and individual brilliance of the front three.Speaking after the contest, The Liverpool Echo reported a measured Klopp as saying:“ The goals were sensational and very important for us. Wonderful.“It was absolutely a great moment for Ox, but I would say his performance was exactly the same as the performance of the team – the goals were great but all the rest could have been better.”“ That's how it is, but it's no problem.“ On Sunday, Adam scored the goal, and now Ox has scored two goals. It's really nice. Absolutely great, a great story.” 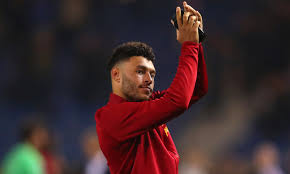 Liverpool sit second on the Group E table, one point behind Napoli who defeated Red Bull Salzburg 3-2.Klopp said that the home team produced  some challenges that his side had to work their way through.“They set up in a 4-4-2 so they had a midfield press we had to play around, we had to be flexible and did that well.“We didn't create too much but we kept them busy pretty much, we looked to find the gaps and pass the ball through. “That was the plan and it worked okay, then not anymore because we lost completely unexpected balls we were not ready for, which in the formation was not possible.“Sometimes we took in the wrong moments a risk, passing a one-two in a very tight situation makes not too much sense.“We had to defend their balls with legs and had to run for it. They got a bit of momentum which after our start was completely unnecessary but that's what happened.”The German said that the second half opened up a bit which allowed the attacking qualities of the European Champions to be displayed.“We scored the second goal, by the way the first goal was very brilliant and the second goal even nicer, and all our goals were unbelievably beautiful.“After the second it was a proper knock for Genk it looked like and we scored the third and fourth. “We conceded one which wasn't cool but it's not the biggest problem in the world.”