Klopp: Divock is a legend on and off the pitch

Jurgen Klopp has given Divock Origi the ultimate tribute by describing the striker as a club legend as the Derby specialist broke Everton hearts once again.

Seeing the No 27’s name on the team sheet must have given Toffee fans absolute nightmares as they would have had a sense that he would have a big part to play in this fixture like he has done on many occasions.

Coming into this fixture, the 27 year-old had scored against Everton on five occasions in just nine appearances.

The Reds were crying out for some inspiration in a game that was a very tetchy affair with Everton intent on making life very difficult for their opponents, while also looking to take something from this game to boost their survival hopes.

So cometh the hour, cometh the man as Origi came onto to pitch to rapturous applause and within two minutes the deadlock had been broken with Origi playing a key role in the lead-up to Andy Roberson’s headed opener in front of the Kop.

Then Everton’s nemesis was in the right spot to convert a smart piece of skill by fellow substitute Luis Diaz to head past Jordan Pickford from close range.

The goal was Origi’s 22nd in the league for Liverpool with six of them coming against Everton, which is double the amount that he has scored against any other opponent.

There has been major speculation that the popular striker will be departing come the end of the season with AC Milan a likely suitor.

So if this is to be his final Merseyside Derby, he signed off in the best possible fashion. 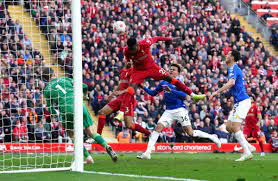 Speaking after the game, Klopp was understandably delighted with his performance and overall professionalism in being ready whenever his number is called.

The Echo reported the manager as saying:

“He is a legend on and off the pitch.

"He is a fantastic footballer for me, and I know it sounds ridiculous as I don’t line him up often, he is a world-class striker, he is our best finisher, definitely.

“He always was and everybody would say the same when you see him do these kinds of things in training, then you see the quality of the squad and other players and it’s really hard I imagine (for him). 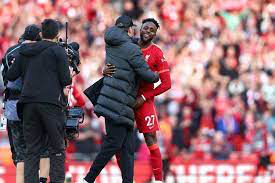 "Other players were not in the squad but in really good shape, I have really hard decisions to make because the boys all want to contribute and are responsible for the situation we are in.

"Everybody loves Div and rightly so. He was again very decisive. I’m very, very happy for him."

For Origi, he was just happy to play a role but was delighted that the team claimed a vital three points in their title quest.

“It is a nice record (vs Everton). When I go on the pitch, I just think about making plays and playing football. Today we needed it. It was a tough game; we knew it was going to be tough for the last games. Eventually we got the three points, so that’s the most important thing.

“(We) have good momentum, but we know we still have a lot of games to come, so it’s back to focus [and] looking forward to the next games.”