Having decided on the four founding members of the TLW Hall of Fame (or the TLW ‘Mount Rushmore’ if you like), it’s now time to elect the next four inductees, or if you like, the ‘Class of 2017’.

The voting process will be the same as before, with a committee which will consist of representatives from TLW, the media, the former players association and also a popular fan vote, which is where you come in, by voting below.

There will be a separate category for managers & coaches, but for now we’re just concentrating on the players. 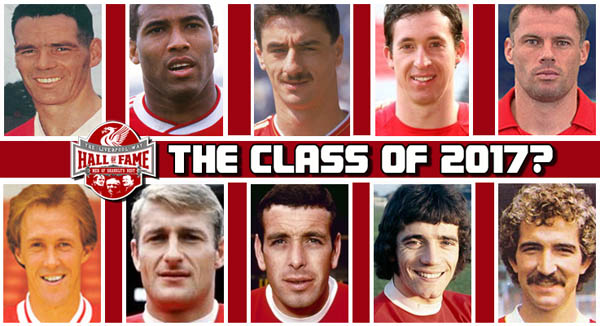 Narrowing it down to ten was a thankless task and there will no doubt be names not on the list who you feel should be, because let’s face it, very few of us would name the same ten.

It was not just a case of picking the ten greatest players, which in itself would also have been incredibly difficult. Other factors come into it, although only great players will be considered. For example, few would claim that Phil Neal was one of Liverpool’s ten most talented players of all time, but nobody can match his medal haul so how could he not be in the ten?

We also felt that it was important to have a mix of players from across several eras rather than just selecting the greats of the 70s and 80s for example. Some missed out on the initial ten as a result of this (Alan Hansen and Emlyn Hughes to name but two), but over the coming years they’ll all be added to the mix.

While it’s easy to argue for the inclusion of some not on the list, we feel it’s not so easy to argue against those who are on it, with the notable exception of Graeme Souness, for obvious reasons. We could have left him out, but rather than make that call ourselves we decided to include him in the ten and leave it in the hands of the voters whether he gets in or not.

We really appreciate your support and participation, both in terms of voting and spreading the word by telling your friends and sharing on social media, and hopefully this can pick up momentum and grow each year.

So without further ado, here’s the initial list of ten along with the poll underneath to cast your votes. Simply select the four names you feel should join Shankly, Paisley, Dalglish and Gerrard in the TLW Hall of Fame.

One of the greatest players of his, or any other generation, Barnes was the star on what is regarded by many as the finest team in club history, but he is as much a cultural icon as he is a footballing one. His early time at Anfield saw him crowned Footballer of the Year on two separate occasions, and but for a serious injury that robbed him of a yard of pace it would surely have been more. A marvellous ambassador, a voice of common sense and a thoroughly lovely bloke.

Liverpool's all time appearance leader and one of the game's true gentlemen. Local lad 'Cally' made his debut for the Reds in 1960 and his final appearance came eighteen years later, in 1978. In between he racked up 857 appearances, scoring 68 goals and winning a whole host of silverware. He was also a World Cup winner with England in 1966.

Dubbed 'Sir Roger' by the Kop, Hunt formed a lethal pairing with Ian St John to help inspire the Reds resurgence under Bill Shankly in the 1960s. He was part of the England squad that won the World Cup in 1966 and left the club in 1969 as Liverpool's record goalscorer with 285 strikes to his name.

The Steven Gerrard of his day, Billy was an iconic figure who spent his entire professional career with Liverpool after joining as a 16 year old in 1938. World War II delayed his debut until 1946 but he soon made up for lost time, amassing 534 appearances and scoring 228 goals before his retirement in 1960. The Scot was held in such high esteem that the Reds were often referred to as "Liddellpool" for a time when he was in his pomp.

The scourge of defences at home and abroad throughout the 1980s, Rush is Liverpool's all time record goalscorer having eclipsed the mark set by Hunt. He's also sixth on the appearance charts and scored five goals in three FA Cup finals, all of which Liverpool won. In his latter years he unselfishly took a step back from being the focal point of the attack and used all of his experience to help bring Fowler though as his successor.

In the halcyon days of the late 70s / early 80s, Souness was as big a factor in Liverpool's dominance as his fellow Scot Kenny Dalglish was. Unfortunately his return to the club as manager was not as successful and his catastrophic error with the S*n on the anniversary of Hillsborough has tainted him in the eyes of many. Liverpool have had few better or more influential players, however, than the hard as nails Scot.