When Jordan Henderson leads the team out on to the NSC Olympiysky Stadium next Saturday evening to take on Real Madrid in the Champions League final, he will be well aware of the magnitude of the moment in terms of his own career.

To say that the 27-year-old has had to walk down a challenging path during his time at the Reds would be a major understatement.

Henderson has had to deal with his fair share of critics ever since he was signed by Kenny Dalglish in the summer of 2011. Eyebrows were certainly raised over the £20million fee for the former Sunderland man and whether he had the capabilities to share the load with Steven Gerrard.

In this day and age where any player who comes to the club with a sizeable price tag is expected to deliver on the spot, the midfielder certainly took his time to find his feet.

The underwhelming feeling of the early performances by Henderson amongst the fanbase was even more evident by the fact that the team was wallowing in mediocrity.

Henderson finally displayed his talent during the 2013/14 season where it seemed to be confident in his role and became a perfect foil for Gerrard and Philippe Coutinho in midfield.

His impact was so great that season, that It is not a stretch to say the loss of Henderson through suspension for a key part of the title run-in was the deciding factor in Man City's victory.

His incline continued the following season and with his improvement and the impending retirement of Gerrard came the great honour of being the new captain.

But an unknown quality was how Henderson would cope with following in the footsteps of such an iconic figure like Gerrard.

For so many years, fans were spoiled by the Number 8 coming to rescue of the side with a stunning goal or setting up the winner with a sweeping cross-field ball.

The truth of the matter is that there is only one Steven Gerrard and you simply are not going to replace his impact. It was clear to anyone who knew the intricacies of football that Henderson was a completely different type of player.

However, his cause certainly wasn't helped by his own body letting him down with a catalogue of injuries over the following two seasons.

The unfortunate thing was when he did play, he was maturing into an all-around player with Klopp moulding him into a holding midfielder which also honed his leadership abilities as it brought a deal of accountability to his game.

It goes without saying that the armband carries a heavy burden attached at a club like Liverpool. You walk the path of many legends before you and are duty bound to carry on the good name of the club.

So, while carrying himself with dignity off the field, the frustration of sitting in the stands watching the team he should have been leading, would have been a true test of his mental strength.

As the 2017/8 season came around, many questions about Henderson’s leadership were set to be answered once and for all.

The return of the Champions League meant that Henderson would be leading the Reds onto the main stage of club football where only the strongest survive. 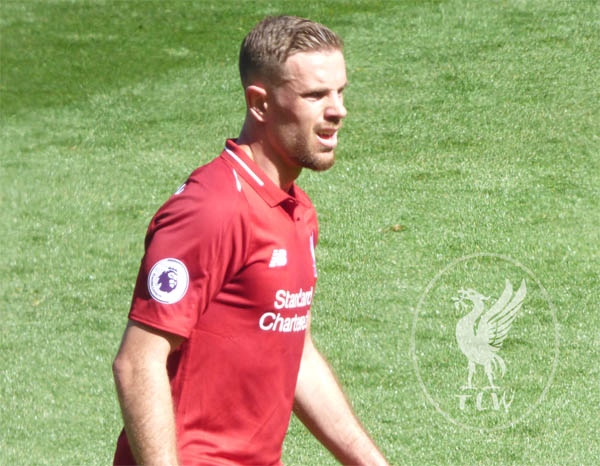 While the group stage and round of 16 were handled professionally, the opponents were going to get a whole lot more difficult as the competition moved into the latter stages.

This was certainly highlighted in the semi-final first leg against Roma. There was a period of time in the first half when Roma was neutralising the pressing game of the Reds and causing their share of problems.

This area of concern, along with the serious injury to the in-form Alex-Oxlade Chamberlain meant things were not going to plan.

One of the criticisms of Henderson's game is that he lacks the imposing presence that puts the opposition on edge. With the eyes of the Football world watching, the midfielder had something to say about that observation.

To put it bluntly, the captain was a colossus, making countless key tackles and interceptions around the pitch and realising his team were on edge, went about settling them down. That kind of underrated quality does wonders for a side.

What followed will go down in Anfield folklore as the Italians had no answer for the attacking onslaught which came their way.

While the front three did what they have done all season in giving the opposition defence nightmares, Henderson's performance was rightly noted as a key turning point in the tie.

Henderson is wise enough to know his limitations at this stage of his career. To put it in Basketball terms, he is the point guard looking to distribute the ball to others, rather than look to take the game on himself and be the star man.

There is no more feared front-three than Salah, Firmino and Mane so it is a smart tactic to get the ball to their feet and let them go to work.

While there is a school of thought that leaders are born not made, Henderson is certainly growing into the role, and he would have learnt so much from the setbacks he has had along the way.

It certainly helps that he has got a staunch supporter in Klopp who has regularly hailed the impact of the England international as a leader and has bristled at suggestions that he is not the right player for the role.

While Henderson is the sort of player that will always have his share of detractors, if he leads the team to their sixth European Cup, surely the negative talk will take a back seat for a while at least.