James Milner: A Man for all Seasons - by Jason Harris

There have been many players who have walked through the doors of Melwood over the years with a high level of natural talent, but I dare say there have been few who compare to the professionalism of James Milner.

I will freely admit that to not being overcome with joy when the Yorkshireman arrived at the club in the summer of 2015 from Man City. It was not a matter of disrespect, as you have to tip your hat to someone who had stayed at the top level of English Football for well over a decade. The concern was more to do with the way that the team was progressing on and off the pitch.

At that point of time there was a lack of direction in regards to our transfer policy, from the obsession over Southampton players, to signing centre-forwards for £30million while maintaining that identifying young players was the top priority. So basically it was a muddled mess and with the 'retirement' of the talismanic figure of Steven Gerrard, his replacement in the heart of midfield seemed a bit underwhelming and so it proved in a difficult first season for Milner individually and the Reds as a whole.

Milner is one of those players that in cricketing terms you would say is an all-rounder, good at a lot of aspects but just missing that key ingredient that truly makes them world class. These types of players are regularly used by managers as 'Mr fix-its" and this was likely one of the reasons why the former English international was moved into the troublesome left-back position at the start his second season at the club to replace the error-prone Alberto Moreno.

It was a role which Milner certainly did not personally enjoy, and at times his defending was not out of the coaching manual, a key element to his game is his superior fitness and workrate so those two factors were pivotal as he looked to cover up any technical deficiencies.

Despite moving back to his preferred area of the pitch at the start of last season, there was a sense that the veteran would have his work cut out to get his place back in the starting midfield, especially as there was more competition for places since he last played in that position. There was also a thought that Jordan Henderson and Milner were too similar and with the former being the club captain, it appeared like Milner could be on the outer.

But once again he found a way to adapt and found a niche role in the Champions League where he was a creative presence breaking the single-season assist record in the competition for assists with eight, along with hounding the life out of key opposition playmakers such as Kevin De Bruyne in the quarter-final clash against City. 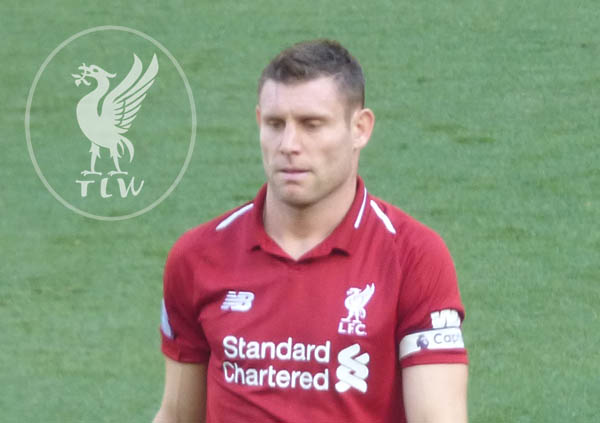 Milner is the true definition of the 'thinking mans footballer' always looking to find ways to improve his game and it is a key reason why he remains a first-team regular at a top club into his 30s while a number of his contemporaries from the early to mid part of the last decade have gone off either into retirement or chased the big coin in the US and China.

The true beauty about a player like Milner is the type of impact he has on the rest of the squad. The vice-captain will demand the same professionalism from his teammates that he produces on the pitch and that is why Klopp has been staunch in his support of him even through some difficult moments in his Reds career. More than willing to ‘put his foot in’ when required, Milner cops just as much as he receives but true to the man, he never makes a fuss and gets back up on his feet as he looks to win the ball back for the team again.

With the summer additions of Naby Keita, Fabinho and the fit-again Adam Lallana, spots in the midfield were going to be more intense than it had been for many seasons and Milner was seen by many to be a casualty. However the start of this season has once again shown the resolute nature of the 32-year-old as he has produced a couple of quality all-round performances and it is clear that Milner will be a key figure for the 2018/9 season.

With the added midfield depth that Klopp has at its disposal, he will be able to rest the veteran on occasions but when the big games come around you just know he will be one of the first names on the team sheet. If we are able to put together a consistent title challenge this season, Milner’s experience in that situation courtesy of his success at City will come in all the more valuable.

The personal reservations over the signing of Milner are certainly a thing of the past and have been replaced by a feeling of comfort knowing exactly what you are going to get from the veteran. Whether called upon to fill a role in a problematic position, produce a rugged challenge to win the ball back for the team or to score a pivotal penalty, Milner is the man to deliver.

That is why come rain, hail or shine, James Milner is a man for all seasons.