FRIDAY - 0700: I wake to the sound of the Champions League theme music coming from my alarm clock. I’m not even close to being tired of that yet.

0702:  Notice the missus has already gone out. We had a fall out last night. Went round Roman’s and ended up playing Monopoly. Once the cash was dished out he goes and pulls out a massive wad of extra money for himself. I accuse him of cheating, he made a gag about “it takes one to know one” so the other half laughs and then gives me evils all night. Really awkward.

0715: Get some breakfast and feed my bulldog, Churchill.  There’s a black and white cat knocking about our street with a little Hitler ‘tash, can’t wait for Churchill to sort him out. Would it be wrong to give a dog cigars and brandy? Probably. PC gone mad.

0830: On the way out I pass my new painting in the hall: me, rising like a salmon to head away another Bayern Munich attack. The missus says it’s sad but it’s just showing what would have happened if I wasn’t banned, so what’s the big deal? Birds don’t get footy at all.

0900: Pull into the training ground and someone has painted over my name on my parking space with “Ron Atkinson”. Terrible banter that.

0912: Di Matteo tries to pull me for being late; tell him to leave it out. Asked what he had planned for the morning and he said endurance stuff. Went into the changing rooms and told the lads to get the cones out for some 5-a-side, left Bobby waiting in the gym. 1-0 JT!

0950: Had a word with Ash about that Ferdinand coconut comment. Asked what it meant. He explained that Rio was saying he was only black on the outside but white on the inside. Me saying that it might have been a compliment didn’t go down well. Ash was well miffed. Touchy fucker.

1035: Got put in what was clearly a reserve side for a match. Lolz and Cahill were palling up again for the firsts. Had the new Spanish full-back on my side. He’s got a mad foreign name with zs and xs and stuff in it so I just call him Pedro. He’s not loving it yet but it’ll grow on him. It was really hard work, him bombing up the pitch leaving me exposed and Mikel in front of me; that lads about as much use as a chocolate...erm, as an ashtray on a motorcycle.

1200: Broke for lunch. Asked Sturridge to pass me the salt and he said that I had to say please four times before I could have it. Bastard won’t let that courtroom mistake die. He keeps calling me Ron too, I’m not Columbus but I reckon it’s him that did my parking space.

1215: Chatting with Torres and mentioned to him that I didn’t like Mata’s little stubbly ginger beard. He proper snapped. Told me that it was lovely and how it reminds him of some of his favourite times, something about loving it shabby, then ran out crying like a teenage girl. WTF!

1225: Looking out the window onto the training ground with Lamps. He looked really down. He said to me it was because of the writing on the wall but there was no wall, and no writing, just that lunatic Ramires doing laps around the pitches with weights in a rucksack. He confuses me sometimes.

1300: Heard Hazard saying to one of the other lads that when training with Belgium he is amazed how good Fellaini is with his chest. Says that he should start taking free-kicks and penalties with it. Waited until nobody was looking and tried a few pens that way. They were utter garbage. Ridiculous idea.

1400: Good afternoon session is topped off by the gaffer coming over and telling me I’ll be starting against Liverpool this weekend. He then said to try and be a lot less shit than the last league game against them because he’s never seen a man ‘megged so many times in one match. Way to build my confidence up you tosser.

1500: Getting ready to leave and I see Ryan Bertrand getting an almighty bollocking as an ambulance pulls up. Ash sneaks past me with his air rifle giggling and saying he’s training the lad to be the perfect replacement for him.

1600: Get home, feet up and decide to check my voicemail from today. One from Rio: “I hear you got a new Champions league painting, is it of you slipping on your arse and crying?” –  twat.

1730: Sky News making a big thing about me and Suarez playing each other and how kicking people who are nasty to different people out of football is important. Then there was a story with some angry news bloke saying how lots of foreign people are scroungers and take all our money. My head hurt.

1900: Watching some preview stuff about our game this weekend. They’re all asking how much Rodgers learnt from Mourinho. Texted Jose for some advice: “The Special One thinks that Suarez is Special too and you might have to pray. Not special in your way either, JT” – I wish he didn’t talk in riddles sometimes.

2000: AVB on SSN telling them how that Caulker is the future of English football and the game might have left people like me behind. Ha! Shows how dumb he is, as if Roy’s football could leave anyone behind. Stick to dishing out the DVDs you glorified scout.

2100: My agent gives me a bell and says that a few of the papers want me to give a comment on this Clattenburg thing. Said to absolutely, under no circumstances, say anything to them. Fair enough. Don’t know who to believe on that one – Mikel could get that Ghandi bloke to take a swing for him but Mata? Who could get mad with him? He’s like a friendly little Elf...with a beard. That Clattenburg does get shirty if you mention his hair though, so who knows?

2230: Get up to bed with my Chelsea pyjamas on and a mug of warm milk. Have another go at that Dan Brown book the missus bought me. You wouldn’t think he’d write this sort of thing after watching all that hypnotism stuff on TV; strange. Tuck in and go to sleep; nod off thinking how happy I am to be back playing, and looking forward to getting a good run in the side. 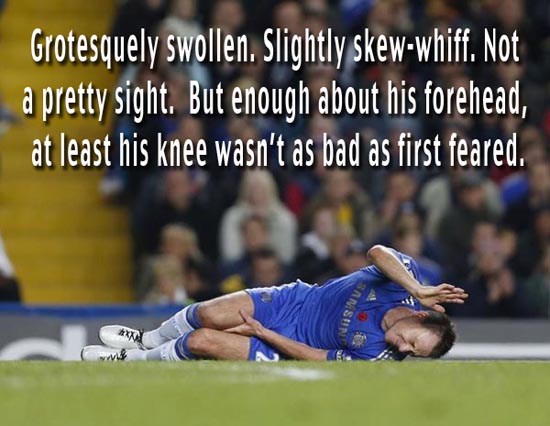 MON 0900: Going for an MRI scan this morning. Bollocks.