We're lucky to have Klopp, so step back and let him do it his way - by Simon Ward - Misc Articles - The Liverpool Way Jump to content

We're lucky to have Klopp, so step back and let him do it his way - by Simon Ward

For five years the way Liverpool FC is being run has been worrying me. Commercially, the club is pretty strong, it seems. Since 2010 FSG have improved the revenue from Sponsorship deals, new kit deals, signed a dozen different partnership deals (Subway, Nivea, Dunkin Donuts etc) and seem to have exploited the potential of our international fan base on tour every year. From that aspect, very good.

Thats where the good stuff ends though.

One of the biggest criticisms of Hicks & Gillett - rightly so - was them promising and failing to put a "spade in the ground" during their bitter 3 &1/2 year tenure. Anfield capacity fell behind big clubs Utd Arsenal and Man City, as well as even the likes of Newcastle and Sunderland.

When FSG arrived the expectation was a 60-65,000 capacity new ground was now within our grasp. I am as happy as anyone that we get to stay at Anfield, and in comparison to our neighbours' wooden shed I should be grateful, but when the extended Main Stand is completed for the start of next season, it will be almost 6 years into FSGs reign.

I struggle to understand why it has taken 6 years to grow by just 8,000 seats. If that had been announced soon after FSG had taken control,that we will extend by just 8,000 seats and it would take 6 years, I'm sure the response would have been toxic. Now though, we all get carried along with the PR bandwagon and numerous pictures of the progress of our new stand. Beggars cant be choosers i suppose.

When JW Henry met the media after the High Court victory, alongside Broughton Purslow and Ayre, he announced "We are here to win" Five and a half years in? One trophy. One title challenge. One lost final. One brief, embarrassing champions league campaign.

The biggest reason for that is poor leadership, lack of strategy and inconsistent decision making from the top. The transfer committee has been discussed over and over so I wont stretch that point out too much. I think the lack of knowledge and planning from the top was evident long before that was put in place anyway.

After the surprising move of hiring DOF Damien Comolli, Jan 2011 saw Hodgson sacked, Kenny come in as Caretaker, we lost our best striker and broke our transfer record twice. £57m spent on two forwards showed big ambition on paper. In reality, it was paid for by selling two other players - one of them a superstar. Everyone knew Andy Carroll was obscenely over priced and Suarez was a gamble (which paid off). Also, young and unproven Andy Carroll was injured, and it would not be the last time as he struggled for fitness and was never a regular.

At this time, nobody knew who the manager would be in four months time, so to make such extreme changes was a big risk as the new manager might simply not fancy them. Alarm bells started to ring.

They did stick with the manager the following season, and the squad was overhauled more than we had ever seen at Liverpool before. Seven new faces arrived, nine were sold, and Comolli was all over the Echo justifying his clever statistical and ROI based approach of signing players. Nine in eleven out, in 6 months. Thats a big spreadsheet.

To expect a squad to change so dramatically and gel straight away is naive, regardless of £££ spent. It was to prove to be the FSG/Moneyball way. 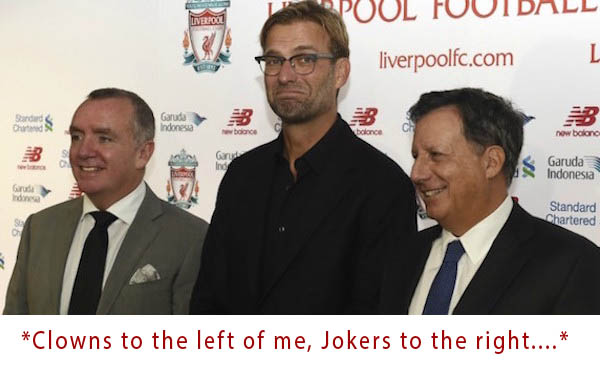 Inconsistency was evident in the league, finishing 8th, however after a tough few years the fans pride was restored with three trips to Wembley and a trophy in the bag. Progress I would say, and success to build on.

Yet by the end of the season both the "brains" behind the money (Comolli) and the manager (Kenny) were sacked. After just 16 months, £110m spent, £75m sold, half a squad changed and a trophy in the bag (we are here to win, remember), the men chosen to run the football side were replaced.

A new manager with new ideas, very little experience and a very specific style of play arrived. I quite like Brendan Rodgers, but he had one season of top flight experience at Swansea and had never managed a team in a European game.

His pedigree and experience were nowhere near strong enough for a club like Liverpool. Neither was our second choice, Bobby Martinez. Clubs like Arsenal, Chelsea, United or City would not have given them a second thought, yet here we were looking to replace a trophy winning club legend with them because we didn't win the 4th place golden ticket to the Champions League.

To add to that, bags of experience walked out the door. Dalglish and Steve Clarke, as well as players like Maxi, Craig Bellamy and Dirk Kuyt. Our record signing was loaned out because he didn't suit the new guy's system.

The committee was formed to manage transfers. This resulted in internal political battles and an emphasis on youth and ROI instead of experience and proven ability. The model is flawed as stats, scouting and moneyball criteria are all considered more important than the manager's judgement. Also, stats can't really judge a player's desire or will to win.

You don't need me to tell you there have been more bad than good. Even that amazing season we nearly won the league, eight players had signed in that pre-season. However, only Mignolet and Sakho were regulars in the run-in (Kolo Toure featured sporadically too), one (Tiago Ilori) didn't kick a ball at all, and five of them (Ilori, Iago Aspas, Luis Alberto, Victor Moses and Ali Cissokho) and were shipped out again the next summer. But, the golden egg of the Champions League was reached and the owners were happy.

It was another platform to build on. However, our best player was sold - again - and over £110m was invested in new players, with £90m of that coming from sales, and another nine new players arrived.

Suarez' No.1 replacement target, Alexis Sanchez, was owned by the club Suarez moved to, yet we failed to close the player swap deal and Sanchez went to a direct rival, while we ended up taking a gamble on a City reject. Both players were on opposite ends of the scale when it came to style and workrate, and the manager clearly didn't want Mario from the start. Justifiably so as it turned out.

The previous season's title charge was built around Suarez and a fragile Sturridge, but we didn't buy a player similar to either of them. How anyone thinks that is a good way to run a football team is beyond me. All of those responsible for that are still at the club, with the exception of Rodgers.

This summer another eight players arrived, despite the managers position under intense scrutiny, despite rumours of manager/committee compromise, and around another £90m was spent (£70m recouped).

Four players arrived with Premier League experience but they were not really stars from the league and Christian Benteke at £32.5m was another over-priced gamble. More big money was also spent on Roberto Firmino, who was not fully fit when he arrived. With the Carroll history and Sturridge record, I was surprised we had done the same again. Overall, it was pretty average.

Even more changes included one of our best players being sold again for big money, our biggest legend and most experienced player walked away too, plus another four players that we signed just 12 months earlier were sold or loaned out. The manager's backroom team was restructured too.

After five years, I just could not work out what the strategy was anymore as there is so much change summer after summer. You can't be successful like that. The revolving players door had barely stopped turning in October and the owners sacked their manager again, taking his brand new staff team with him.

As I said earlier, Rodgers did not have the record, the experience or the prestige to deserve a job at a giant club like Liverpool in the first place, but the owners were certainly guilty of not providing him with a strong enough environment to help him succeed.

I think we all expect what's coming this summer; more massive changes, as we have a new manager who will want rid of some players from an under-achieving squad. Its hard to disagree with when you watch them twice a week, with some players making mistake after mistake. One day though, it has to stop. One day, we need stability, consistency and everyone at the club striving for the same goal - success. Otherwise, we will not get it.

After 64 months in charge, FSG have not achieved stability, consistency or what they said they wanted to do - to win.

There is no evidence of a proven, successful longterm plan. Selling your best players makes progress twice as hard. Six people deciding who the manager can buy and then blaming him solely if they don't perform is absolute lunacy.

The players bought column looks like the owners have spent heavily. The players sold total covers a fair chunk of that, though. The Premier League TV money has gone through the roof, we tour abroad every summer, and where is the extra money from these fantastic sponsorship deals going?

There is a focus on buying players for the future, but when you see quality like Sterling and Suarez being allowed to leave, then we are guilty of buying them to sell, not to develop a team to win.

To add to that, for a club who invests heavily in players based on their performance and statistics, to reward Simon Mignolet with a 5-year contract is baffling. Liverpool don't give away many chances, but we do concede a lot of goals and he doesn't stop many. He lacks physical strength when coming for crosses and his distribution is dreadful. That decision alone is a disgrace. When was the last time one of his saves won us a game? Not good enough, but he gets a new contract.

LFC have a big-name manager now, with experience of what it takes to win at the top level. Credit to FSG for getting him. Now please step back. This is the best opportunity you have had to get stability, continuity and success by giving him full control of transfers in and out, and the time to steadily build - and keep - a successful team.

After the last 5 years under achievement, we are lucky to have this manager. Let him do it his way. He understands football. FSG still don't get it.