Time to bring back Philippe Coutinho?

To say Philippe Coutinho’s switch to Barcelona hasn’t gone to plan would be an understatement following his £105m move in January 2018, but should Liverpool even entertain the idea of bringing him back to Anfield?

With Barcelona’s recent acquisition of Antoine Griezmann for £107m and their attempt to lure Neymar back to Camp Nou, the Catalonian giants are actively seeking to sell players, with Coutinho among that bunch. Neymar’s time at PSG looks to be coming to a premature end, so one Brazilian could fund the move for another.

After leaving Liverpool to pursue a childhood dream of playing for Barcelona, it didn’t work out and just 18 months later Coutinho has been left wondering where the next step in his career will take him; could it be a return to Merseyside?

Following rumours linking the 27-year-old with a move to Manchester United, Coutinho’s agent Kia Joorabchian stated it would be very difficult to switch to a direct rival of Liverpool. He said: “I think Liverpool lies very, very deeply in his heart. He was a big fan of them throughout the campaign [last season].

“He was wishing for them to win the title and he has a very strong affinity there, so I think it will be very difficult for him to go to a direct competitor of Liverpool from a personal standpoint.”

Coutinho’s transfer to Barcelona sparked mixed opinions among the Liverpool fan base, questioning his morals and actions during the process. The Brazil midfielder reportedly faked a back injury to assist in forcing the move through, which angered some fans and left a sour taste on what was a magnificent six-year tenure at the club.

However, Jurgen Klopp’s side have proved their quality without Coutinho, competing at the highest level in both European competitions and the Premier League. There is a split in opinion for the Reds fans as they debate whether they would take him back, and if you fancy betting on the outcome, click here to get football betting offers as Coutinho is currently 5/1 to switch to Liverpool. 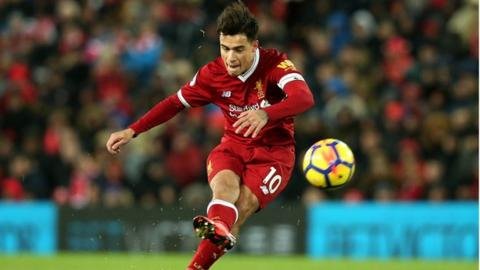 If you look at Coutinho’s statistics during his time at Liverpool, he scored 54 goals and registered 45 assists in 201 appearances. The Brazil midfielder possesses an abundance of quality and would undoubtedly be an excellent asset for Liverpool. He has proven himself in the Premier League, and if a deal was available, it would be difficult for Klopp to turn him down given how familiar he is with his ability.

Reuniting Coutinho at Anfield would be an unexpected turn of events, but the Reds would be thoroughly aware of what an outstanding talent they would be acquiring. Again, his ethical approach is questioned among the fans for the way he left, but overall, it would be difficult to reject him after the magic and affection he displayed towards Liverpool.

However, the Brazil midfielder’s future remains firmly in the balance and could still play a key part in helping Barcelona reach the heights they desire to reach, with Champions League the main target. Griezmann arrived from Atletico Madrid and there was debate as to whether he would take the number seven shirt which Coutinho currently occupies. It was recently announced, however, that the France striker will wear the number 17 shirt, which could suggest that Coutinho still has a future at the Camp Nou, but it will be interesting to see what happens over the next few weeks.