Step away, Steven. For your own sake - by Chris Smith - Misc Articles - The Liverpool Way Jump to content

Step away, Steven. For your own sake - by Chris Smith

Amid the triumphalism that accompanies the endless re-telling of the Bill Shankly and Liverpool story, there’s a very prominent tinge of sadness.

Beneath those legendary sound bites regarding bastions of invincibility and the yearning for times when first was first, not fourth, is the inescapable knowledge that Shanks’ post-Liverpool life was shrouded in heartbreak.

The man who rebuilt Melwood – “a bloody shambles” when he took over - was eventually asked to stay away, when he had been unable to.

Parallels can be drawn between Shankly’s fate and the most recent addition to the Anfield Hall of Fame, Steven Gerrard.

A year after he revealed his decision to leave, it seems the skipper is also having real problems adjusting to life after Liverpool. Of course, there’s no chance of Gerrard being told he is no longer welcome at Melwood, but that same sense he is hanging on is, unfortunately, quite evident.

His presence in the Liverpool ‘Legends’ team who lined up against an Australian team this week really irked me… And not just because he actually earned a term that once meant something before the club made it interchangeable with ‘former player’ in order to sell tickets to meaningless friendlies either.

To me, Gerrard is above that. At least now he is. I don’t want to see him rolled out alongside the likes of even true legends like Rushie and Aldo, just yet because it damages the aura that still surrounds him. 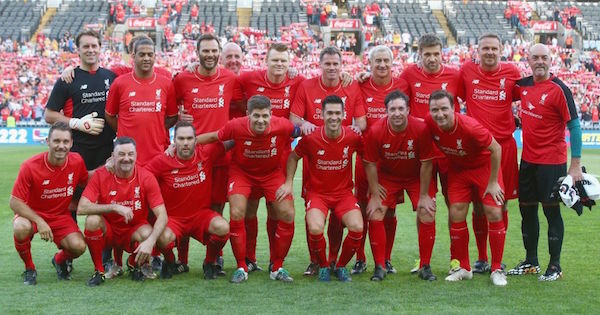 For Gerrard though, it was clear he was simply desperate for another chance to pull on the red shirt, he cherished wearing so much, in any capacity.

In many ways, it’s like that part in Rocky II when, after being told he can’t fight anymore, The Italian Stallion goes back to help out at Mickey’s gym, because he has “gotta be around it.”

“You know, you're like royalty here, kid. You want those guys to see you carryin' towels and buckets around? Where's your dignity?” Mickey said, and to put it bluntly, I’d ask the same of Gerrard right now.

Because let’s face it, playing in the same team as Phil Babb and McAteer under a ‘Legends’ banner is akin to holding-up spit buckets and carrying dirty towels.

It’s demeaning to Gerrard, who truly is ‘royalty around here’

There’s plenty of time to play these games when he’s in his 40s.

Unless it’s a charity match, which this certainly wasn’t, he shouldn’t be mixing it those unfit to lace his boots, just so the club can cash in. Not yet anyway.

I mean, what’s next Steven? Chasing after the loose balls during the half time shoot outs, a la Alan Kennedy?

Yet this is far from the first unsettling evidence of Gerrard’s inability to readjust to life after Liverpool.

Interviews with friendly journalists following the end of the LA Galaxy’s season made it abundantly clear he still harboured dreams of playing for Liverpool again.

It came across as a desperate plea and it forced the brand new manager into the awkward position of having to say “he’s welcome, but to train and nothing else.”

If I were Klopp, looking to make his mark on the squad, Gerrard’s presence at Melwood in those early days would have been as welcome as a hamstring injury for every centre half at the club (wait a minute?!), but what was he to do? Say no? Not a chance.

And so Gerrard came to train with a big grin on his face and, sure enough, it all seemed rather awkward.

Now the club is seemingly scrambling to “find something” for Gerrard, in Klopp’s words, as the former skipper speaks of doing his coaching badges heading into his last year as a player.

To me, this is all such a shame, because when he left for LA last summer, he looked happier than we’ve seen him since Istanbul or Cardiff the following year. Finally unburdened from the expectation and responsibility, an encumbrance he shouldered so heavily for so long, the smile had returned to his face.

He spoke glowingly about being able to spend time in public with his beloved children, something that was impossible in Liverpool. He seemed to love bringing his friends over to share in his new life, while embracing sitting courtside at Lakers games and living that Hollywood lifestyle.

However, that seems to have eroded very quickly, with Gerrard desperate to reignite his association with the club he’d been with since the age of 8, even in ways that are clearly beneath him.

Listen, if it were up to me, he’d have never been allowed to leave under any circumstances. His departure and the circumstances of it are a sad story in of itself, but we can thank FSG, Brendan Rodgers’ astonishing arrogance and the gutless playing staff for that debacle.

Regardless, it happened. We all had to come to terms with it, no-one more so than the man himself.

For Gerrard, he may have left, but he hasn’t stepped away.

I hate to say it, but he could take a page from his England teammate Gary Neville’s book, who seems to have had no trouble removing himself from the Manchester United bubble, after a similar timespan with the club, at least in a publicly-presented capacity.

Now’s the time for Gerrard, like Neville and Jamie Carragher to a lesser extent, to put a little distance between himself and his boyhood club for the good of everyone.

That means no training with the first team, no constantly talking about coming back in a different capacity and certainly no playing in these preposterously-titled ‘Legends’ matches.

The Return will come, of that there is no doubt, but both sides need a little space; a chance to feel like they were ever apart, in order for that return to really mean something … when the time is truly right.

Likewise Jürgen Klopp needs the time and space to develop his own culture at Liverpool without the massive shadow of Gerrard looming over what he surely still considers ‘his’ club and a squad who naturally still refer to as ‘The Captain.’

I thoroughly understand Gerrard’s difficulties, on a smaller scale. When I left Liverpool about 8 years ago, I was back up every single chance I got for two years. Eventually I realised I had to let go, because it was still dominating my life and preventing me from adapting and embracing a new place and time in my life.

By turning up at my old flatmate’s house every weekend and expecting a bed, I ran the risk of outstaying my welcome… of it becoming awkward. Maybe it did, but I was blissfully unaware.

As much as I hate to say it, Gerrard may not know it, but he is making it awkward.

By hanging on, he runs the risk of tarnishing what he had and, like Shankly, adding a sad epilogue of a man who couldn’t let go to what had been the greatest of tales.

For now, Steven, it’s time to step away… for your own sake.