Liverpool clinched their first title under Bill Shankly with a crushing victory over Arsenal, but there was no sign of the championship trophy at the end of the game. 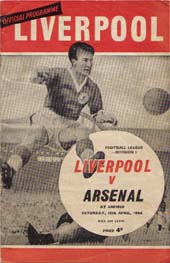 With just two points being needed from the last four games it was a case of when not if we'd be confirmed champions. But this was the last home game of the season and both players and fans were desperate to secure the championship.
On a gloriously sunny afternoon, there was an early scare when Arsenal were awarded a penalty, but Tommy Lawrence was on hand to save George Eastham's kick.  We were relentless after that, scoring five goals in an hour through St John, Thompson (2), Arrowsmith and Hunt.
BBC cameras were on hand to record the action, as well as the Kop who were being filmed for a documentary. It was the year that the Merseysound took over the world and the Kop regularly sang pop songs, especially You'll Never Walk Alone.  After the game the players did a lap of honour with a cardboard replica of the trophy. The reason the real trophy wasn't present is that it was still under lock and key at Goodison, home of the deposed champions. Their explanation was that the season hadn't ended yet.