The 1986 all Merseyside FA Cup Final is one of my favourite memories as a Red. There are a number of things that stand out from that day, I remember watching it on TV as a kid, I was 12 at the time, and the memories are still vivid over 27 years later. 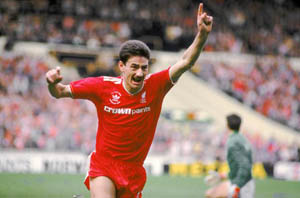 Back then the FA Cup Final was probably the highlight of the football year, unless you reached a European Final of course, which we did on numerous occasions. Cup Final day was special though, even when it wasn't your team involved.

The TV coverage started early in the morning and unless you were lucky enough to be going to the game you'd be sat in front of the telly all day watching the build up, with the highlight being the TV cameras being on the team coaches as they made their way to the stadium.

I can remember watching in amazement that year as fans risked life and limb climbing up the walls of Wembley and used their scarfs to swing across to the opening where their mates were waiting to catch them.

I can remember Gary Lineker putting the Blues ahead and things going badly wrong in the first half. We were awful, really disjointed and couldn't get anything going. The second half wasn't going much better either, Bruce Grobbelaar and Jim Beglin got into an altercation that ended with the keeper shoving the full back in the chest and at that stage the League and FA Cup double we'd been hoping for was not looking likely. Then, somewhat against the run of play, a Gary Stevens mistake led to a Liverpool equaliser and the rest, as they say, is history. 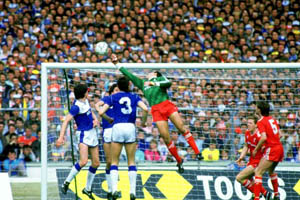 Despite the years that have passed, I still remember things so clearly; Jan Molby completely taking over the game… Grobbelaar making an incredible save from a Graeme Sharp header when the score was 1-1… Craig Johnston's goal and camp little leg flick celebration thing after he gave us the lead… Ian Rush wrapping things up with a swift counter attack that ended with him smashing a camera in the corner of the net…

But when I think about the '86 Cup Final the one memory that stands out above all others is our first goal, and Johnston trying to vulture it from Rush. It was pretty shameless, as whilst players are taught from a young age to follow the ball in and don't leave anything to chance there was absolutely no danger at all that Rushy's shot would be cleared by a defender, as there were none anywhere near it.

Johnston wasn't playing it safe, he was just trying nick the goal for himself. I loved it though, I'd have done exactly the same thing in his shoes and I've always thought it should have gone down as his goal as I'm convinced he got to it before the whole of the ball crossed the line.