Lost in the glory that followed the defeats of Juventus and Chelsea, it’s easy to forget just how special this chilly December night really was.  The Reds went into the critical game six of the Champions League group stages coming off two of their best performances of the season – the famous 2-1 victory over Arsenal and the destruction of Aston Villa (the game technically finished 1-1 but we pissed all over them).

Needing to win either 1-0 or by a two-goal margin (assuming Monaco would beat group whipping-boys Deportivo) to qualify for the last 16, morale in the camp was helped no end by selfless captain Steven George Gerrard’s latest rousing ‘I wanna win things, me me me’ speech, which conveniently found its way onto the back pages on the morning of the game.  But, not for the first time in 2004/05 and certainly not the last, Stevie G's awesome on-field talents ensured the next day’s papers would be full of the right sort of headlines.
The outcome was all the more remarkable considering the reds started the second half needing three goals (sound familiar?) leaving Liverpool staring the dreaded UEFA Cup in the face.
The reds had made a bright start but fell behind against the run of play when the cheating, snide, but brilliant Rivaldo swept a free kick past an all-too static Chris Kirkland and despite the immediate goalscoring impact of outstanding half-time substitute Florent Sinima-Pongolle, the sides were still level with just ten minutes to go.
It seemed like it was going to be a case of so close yet so far after the reds had hit the post, seen two goals harshly ruled out and had a host of decent penalty shouts turned down. But just as Harry Harris was getting ready to file his latest ‘Gerrard to Chelsea’ copy, Neil Mellor, fresh from his match-winning strikes against Arsenal and Middlesbrough, was brought on to replace the clearly unfit Milan Baros. 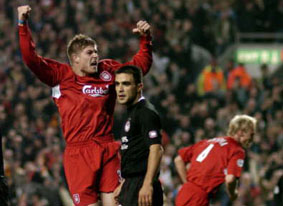 When Mellor stabbed in from close range a couple of minutes later, the stage was set for a frantic finish. As the game wore on the Greeks’ tactics had become increasingly cynical and infuriating and that, combined with the importance of the occasion, riled Anfield into a collective voice as noisy and raucous as it had been in years.
Gerrard had been rather lacklustre for the majority of the game, perhaps weighed down with the pressure his earlier comments had placed on himself, and was somewhat fortunate to escape with a yellow card for kicking out in frustration at an opponent early in the second half.  But some things seem just meant to be and when Mellor neatly cushioned Carra’s cross into the path of Gerrard the captain fired an unstoppable half-volley past Nikopolidis to send a standing Kop into delirium.
A tense last five minutes ensued but Liverpool held on for a famous and absolutely vital victory in a match that, in many ways, signalled a rebirth for the famous old stadium.  The voice of Anfield, George Sephton, described the atmosphere as ‘the best in 30 years’ in his post-game announcements - it ended up not even being the best of the season.  Walking out of the ground, we were just relieved we had Champions League football to look forward to after Christmas and a bit more money to boot.
The best we could hope for was to avoid the big guns in the draw for the last 16 before bowing out in the quarters, but there was no chance we could actually go all the way and win it, right?