After one of the most contentious transfers in Mersey soccer history, Dave Hickson became a Kop legend in his first Reds appearance at Anfield while the Blues suffered a humiliating defeat on their travels. 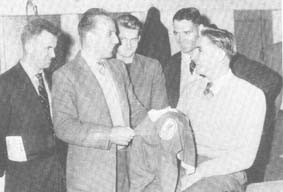 The centre forward’s move from Everton to Liverpool in November 1959 created shockwaves throughout the city. Blues were unhappy that Hickson was sold, while Reds didn’t like the idea of buying someone who was seen as surplus to requirements at Goodison.
But after the initial outrage 49,981 squeezed into Anfield for Hickson’s debut in a 2nd Division game against Aston Villa, which we needed to win to get the promotion campaign back on track. Hickson was given a fantastic reception and scored both our goals in a 2-1 win. There was even more good news to come, as it was announced that Everton had been thrashed 8-2 at Newcastle.