Perennial crowd scapegoat Jack Balmer wrote himself into the record books in this game against Arsenal when he hit his third successive hat trick, a feat that has never since been equalled. 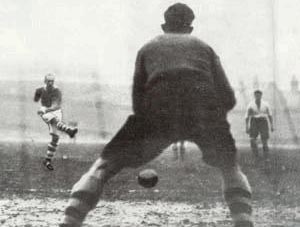 Unlike crowd favourites Liddell and Stubbins, Balmer normally came in for criticism as he was often accused of shirking tackles, meaning that many of his better performances were away.
But his name was on everybody’s lips at the time of this fixture after he hit hat tricks on the preceding games against Portsmouth and Derby.  A first half penalty set Balmer on his way, but we trailed 2-1 at half time. Then in the second half he struck twice to ensure his place in football folklore. The second goal was greeted with what the Liverpool Echo described as ‘the loudest cheer in Anfield’s long history’.
The goals played a vital part in Liverpool’s title success that season, with Balmer hitting 24 in all. No other player in the English game has managed three successive hat tricks since.