Tommy Smith is one of Liverpool's all time greats. Having joined from school, he made his debut in 1962-3 and eventually retired at the end of 1977-8.

Only an unfortunate DIY incident when he dropped a pickaxe on his foot prevented him from winning a second European Cup with the Reds.  Known as the Anfield Iron, he wasn't one to be messed with and Bill Shankly came out with two famous quotes about him. One was that he could start a riot in a graveyard and the other was that he wasn't born, but quarried.

But for many years now Tommy has been a shadow of his former athletic self. Whereas players now have a month off if they break a toenail, in Tommy's day they were simply pumped full of cortisone and told to get on with it. Now he is paying the price for that and struggles to get around, as anyone who has witnessed him limp his way towards the Anfield press box will testify. 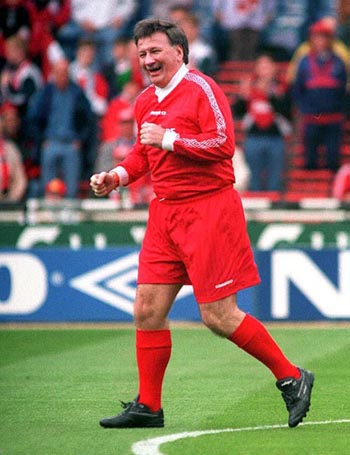 However, Tommy isn't one to let his injuries get him down and when he was asked to take a penalty for charity at half time in the 1996 FA Cup Final, he was more than happy to. He showed a lot of courage as he struggled to make the run up before feebly hitting the ball wide from the spot.  But while most non Reds just laughed at how brittle he has become, one Blueshite who works in Bootle DSS had a sick thought. He remembered how he once processed a claim from Tommy for Disability Living Allowance, a benefit that is not means tested and anyone can claim if their injuries are severe enough.

Considering Tommy's right hip, right elbow and both knees are made of plastic and his wife has to dress him some mornings, it's fair to say few people would begrudge Tommy this benefit.   But this particular Blueshite thought Tommy's claim was fraudulent and reported him to his fellow Blueshite in the cheats section. As a consequence his benefit was stripped and Tommy was left with no guaranteed safety net income.

Tommy appealed and went to court, but it was a case of the Establishment closing ranks and the judge backed the decision, making it a sad day for the common man.  Tommy continues to ply the after dinner circuit and dictates a column to the Echo despite being in great pain for a lot of the time. But he wouldn't need to have to do so much of this work if it wasn't for a bitter Blueshite jobsworth in the DSS.